Communist Party of Turkey expressed its support to the resisting people of Venezuela in a meeting organized in Kadıköy, İstanbul 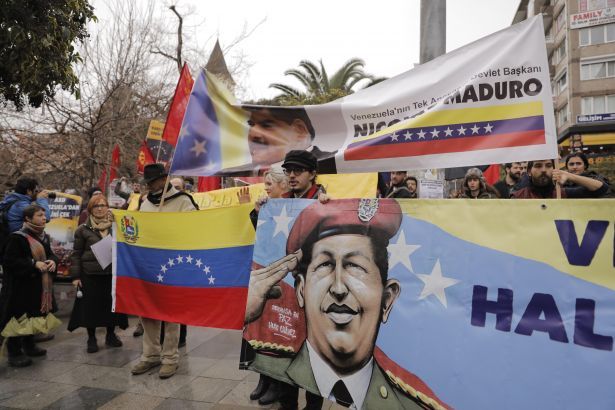 Communist Party of Turkey (TKP) organized a meeting in Kadıköy, İstanbul today, on January 26, to protest the pro-US coup attempt in Venezuela.

The group gathering in Kadıköy marched on the streets of Kadıköy and made a press statement after the march. During the protest in which the Venezuelan Ambassador to Ankara Jose Bracho Reyes also participated, the people shouted: "Venezuelan people are not alone".

The press statement mentioned that the US continues to be the main enemy of the people of Latin America and this is not the first time it threatens the people in Venezuela. It is noted that TKP strongly condemns the attempts of the US and its allies and the future of Latin American people will be determined by the struggle of the people for equality and socialism.

The Venezuelan Ambassador to Ankara, Reyes, also made a speech and thanked the people of Turkey for their support to the people of Venezuela and the Bolivarian project. Stating that imperialism now became more offensive with this war it waged against Venezuela, Reyes reminded that “the world is bigger than five countries and the struggle will continue”.

İstanbul provincial head of TKP, Aydemir Güler, repeated, in his speech after the ambassador, that the struggle continues and added that “just like how Chavez repulsed the counter-revolution and the coup attempts in 2002 and how he continued to be in power with the support of anti-imperialist people of Venezuela, this is what will happen today, too”.

Reminding that President Maduro made a statement saying that “we want peace, but those who want peace should get ready for a war, Güler noted that “the essence of the Venezuelan, Bolivarian revolution is wishing for peace and being ready to struggle for peace”.

“The struggle had grown with Fidel, with Chavez and it will continue growing with the resisting people of Venezuela”, he added.