Cargill workers who were dismissed because they were unionized and were not reinstated despite the court decision, continue their resistance in front of the company's headquarters in Istanbul's Ataşehir district. Communist Party of Turkey (TKP) Ataşehir District Organization visited the workers to express solidarity 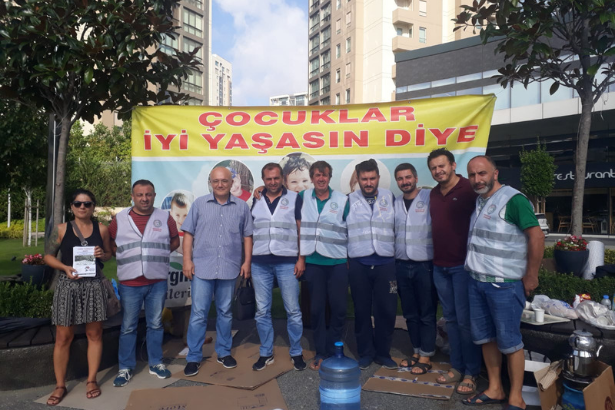 Cargill workers, who were dismissed on the grounds that they were members of the trade union, carried their resistance to Istanbul.

TKP Atasehir District Organization paid a visit to the resistance which has been continuing in front of the Palladium Tower for three days.

TEKGIDA-İŞ Union member Suat Karlıkaya told the process the workers who resisted for 492 days faced because they were fired unlawfully.

Karlıkaya said: "On April 17, 2018, 14 Cargill workers, who are members of our union, were called by the company's human resources to sign severance pay, notice payments, and plus three salary guarantees. Together with our friends who didn't accept this offer, we decided to resist in order to get back to work. Cargill's management argued that these dismissals were not related to trade union activities, but to the company policy regarding a quota problem. However, the court acknowledged that it was because of being unionized and the case was concluded in our favor."

Despite the court decision, the Cargill management announced that they would bring the case to appeal within 15 days. Karlıkaya said: "We have decided to carry the resistance to the headquarters in Istanbul and here we are. We want our jobs back and we will not give up until we gain."

Expressing their solidarity with the workers, TKP Atasehir District Organization members invited Cargill workers to the event titled "Seizure of Severance Pay" to be held at Icerenkoy District House.