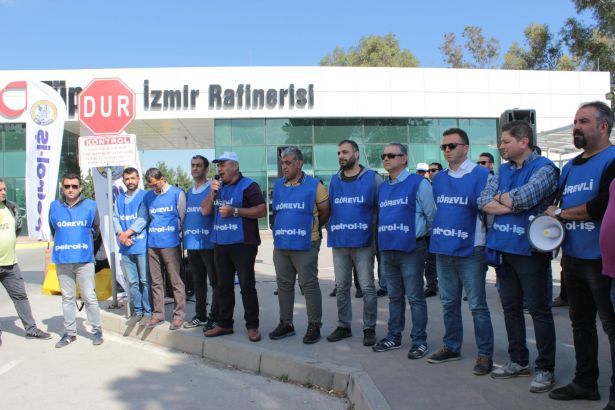 For a while, TÜPRAŞ, where collective bargaining agreements have reached a deadlock, workers have been continuing their warning demonstrations against Koç Holding, as are the other three refineries along with İzmir's Aliağa refinery.

On May 8, the delegation of TKP İzmir provincial organization paid a solidarity visit to the workers of Aliağa refinery. TKP delegation conveying their feelings of support to workers in the resistance was welcomed by the workers.

The delegation also held a meeting with the president and management of the Aliağa branch of Petrol-İş on the field.

The delegation, which received information about the action and the process of the demonstration, conveyed their feelings of determination and solidarity to the union leaders.

TÜPRAŞ is a company in Turkey operating four refineries located in different cities. The company controls all of Turkey’s refining capacity and owns 59% of the total petroleum products storage capacity.

As the negotiations for collective labor agreement between TÜPRAŞ management and trade union Petrol-İş hit a deadlock due to the attitude of Koç Holding, workers initiated warning demonstrations in all refineries.

Workers met in front of İzmir Aliağa refinery on April 8 and hanged a banner in front of the refinery stating “I am ready for Collective Bargaining Process for my family” in order to show their determination.