Communist Party of Turkey (TKP) Adana Provincial Organization made a solidarity visit to the agricultural workers who lived in Adana's Karataş and were exposed to flood disaster recently. 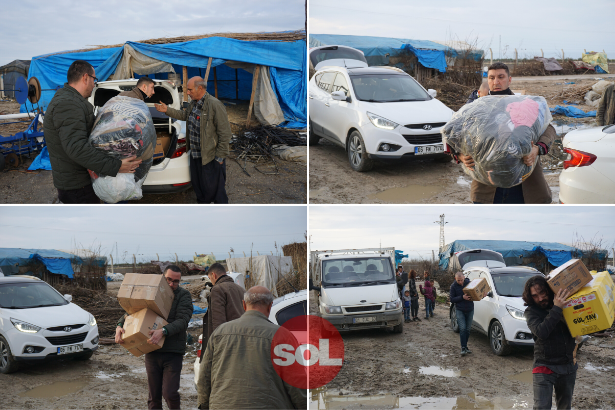 Agricultural workers who had to migrate from Şırnak to Adana due to forced migration in the 1990s and remained in tents in Karagöçer district of Karataş were exposed to floods last December.

After the flood, the Governorship of Adana decided to remove the tents, claiming that there was a risk of the channel overflowing. After this decision, some of the tents were dismantled, but because a decent settlement area could not be found for thousands of flood victims, the dismantling was delayed.

Agricultural workers interviewed by a delegation from TKP Adana Provincial Organization stated that they have been in these lands for 30 years but their problems have not yet been solved.

Workers said they want to live humanely and stated they wish their basic problems such as health, shelter, education and electricity be solved.

TKP members, who also handed over the collected aid packages, said that they are in solidarity with the agricultural workers and will do their best to bring up the problems they are facing.