TKP: No need to be afraid of revolution!

Communist Party of Turkey (TKP) has released a statement regarding the 103rd anniversary of the October Revolution, saying just as 103 years ago, the working class will come to power again. 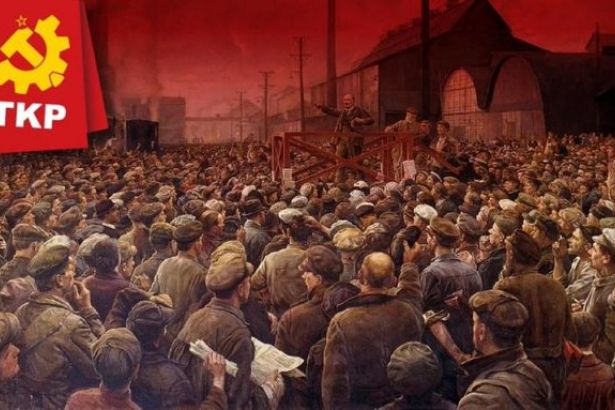 On the 103rd anniversary of the Great October Revolution, the Communist Party of Turkey (TKP) has made a statement, saluting the October Revolution and stating that believing in the revolution is the biggest remedy of the fears we live today.

There is no need to be afraid of the revolution!

Revolution is a very powerful shock. The ground under the feet of the bourgeoisie shakes. For this reason, they love to defame the revolution as a "coup" and to dispraise it. They find it difficult to accept the great popular power and legitimacy behind it. If they can't ignore it, they try to destroy it.

103 years ago, the laborers in Russia created an unprecedented shock. They were sure of themselves. They shook, tore down, and rebuilt. The revolution first gifted peace to the workers in the territory of Tsarist Russia. Subsequently, an egalitarian, modern, and developed country was established together. The Soviet Union had been an inspiration for many countries; the nations looking at the land of the revolution saw their awakening there. Humanity took its biggest steps forward in the presence of socialism. It solved the seemingly insurmountable problems; it cures diseases; it pushed boundaries in culture, arts, and sports; it raised the bar every time. None of it was easy, but it was achieved.

All these developments, prosperity, and happiness in the Soviet Union would not have happened without the revolution. Therefore, the October Revolution, for which we celebrate its 103rd anniversary, is one of the most important days in the history of the working class, perhaps the most important.

And this is the greatest lesson of the October Revolution: The working class wins when it is confident, organized and knows what it wants. When it fears, it loses.

Now, humanity is taking steps backward. We are experiencing disasters, destruction, poverty, and hunger. Working people endure all kinds of disasters every day. And each new day brings greater fears than before. Capitalism benefits from our fear; it benefits and prepares new disasters.

Isn't something clearly wrong here? We are the ones who have experienced so many disasters, who continue to live. While we face death every day, we do not need to be afraid of that big shock. On the contrary, believing in revolution is the greatest remedy of fear. If it will, let the class of bosses fear revolution! And they should know that this fear will not save them. The working class will again come to power, just as it did 103 years ago!