TKP: No freedom and democracy will come from capitalists! 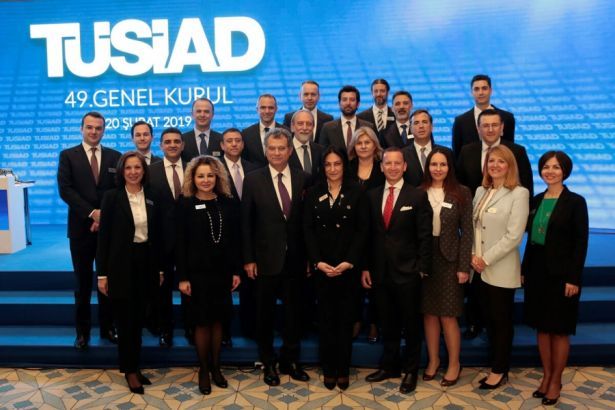 Communist Party of Turkey (TKP) has released a statement regarding the public messages Turkish Industrialists' and Businessmen's Association (TÜSİAD) gave in its general assembly held on Feb. 20.

Erol Bilecik, the former president of the biggest capitalist organization TÜSİAD, handed over his position to the new president Simone Kaslowski, the CEO of Organik Kimya Inc. The company belongs to the Kaslowski family. In 2013, the company was known for its dismissal of one of the occupational physicians fighting against the working conditions risking the health of workers in the company’s factory.

After making a speech about “freedom, democracy and the superiority of law”, Erol Bilecik handed over the organization’s presidency to Kaslowski in the assembly meeting.

Bilecik said in his speech that “All the values of the Republic, especially democracy and liberties, are ours for safekeeping. It is our duty to protect them. We have to work hard to develop democracy in our country.”

After the capitalist organization’s general assembly, TKP issued a statement noting that these values cannot be owned by capitalists and the working people of Turkey cannot be ‘in the same boat’ with the capitalists.

Erol Bilecik, who left his position at the General Assembly of the capitalist organization TÜSİAD today, supposedly criticized the government by saying, "There are very important values that make countries strong; these are freedom, democracy, the superiority of law and respect for human rights". Erdoğan can respond by saying "what did you want that we did not give?". As the ones who trimmed all the achievements of the working class of Turkey, the planners of the September 12, 1980 fascism, we know that TÜSİAD has nothing to do with human rights, freedom, democracy, and law. TÜSİAD’s bosses only think about filling up their wallets. Big capitalists of TÜSİAD or other capitalist organizations have always been enriched over the years of AKP government, but injustice has increased exponentially in Turkey.

In this respect, bosses owe to Erdoğan. Thanks to him, exploitation, inequality, and plunder have increased. However, Erdoğan owes to the bosses of TÜSİAD as well. Without the support and patronage of the bosses, it was impossible for Erdoğan to come into power.

We say that no freedom, democracy, law, and human rights will come from capitalists. You've plundered the country, and now you have started to mock people. We are repeating; we are not in the same boat with you!