TKP: May 1 the Workers’ Day, not the parasites'

The Communist Party of Turkey (TKP) released a statement for May 1 International Workers’ Day, calling for putting an end to the existing social order of exploitation in order to establish a new world in favour of the workers who are forced to work in severe conditions amid the pandemic. 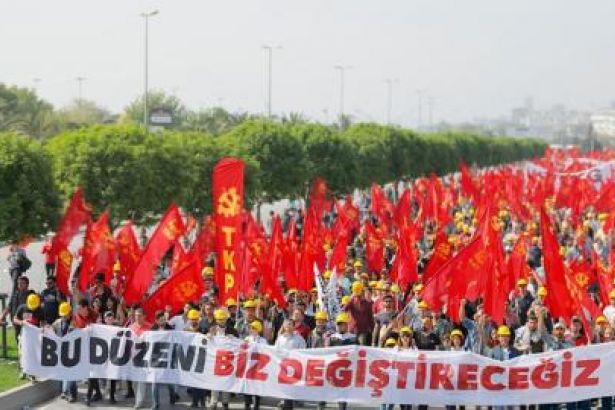 TKP released a statement on April 28 with regards to the upcoming May 1 International Workers’ Day as the world is going to celebrate May Day amidst the COVID-19 pandemic.

“There are two classes, whoever is not on one side is on the other,” TKP says, adding that the Party is fighting for a country and a world without exploitation and wars in order to establish a new social order for the workers who are subject to exploitation in “ordinary” times as they face heavier conditions in such “extraordinary” times as pandemics and wars.

This Social Order Must Change!

May 1 the Workers’ Day, not the parasites'

There are two classes, whoever is not on one side is on the other.

There are two classes.

There are two classes. This is the “ordinary” truth of this social order.

Does the situation change in “extraordinary” times?

Do we form a unity immediately when the country is in a war or when a pandemic hits all the world? Can we say that these two classes cooperate and share the same fate in such extraordinary situations as wars or pandemics?

Ask this question to the soldiers who are sent to the frontlines in wars! Is any single one of them coming from the exploiting class?

Ask this question to the workers who are forced to sit on the sewing machines one-half meter away from each other during the days of pandemic! As they are sitting and working very close to each other at non-ventilated and low-ceilinged workplaces or as they are sharing the same air in small houses with their family members who are working at different workplaces and factories…

Ask them where their bosses are.

There are two classes.

May 1 is not the day of labour and working.

May 1 is the day of the workers, those who starve when they do not work, who own their whole assets to their labour.

The truth does not change even though the exploiters, the bosses attempt to be part of May 1 Workers’ Day as they just seize upon everything and sit on the whole wealth, even though they shamelessly publish celebration messages on the Workers’ Day for the workers who they exploit all the day.

May 1 is the Day of the Workers, who have nothing but their labour, the Day of unity, struggle and solidarity.

Why we celebrate such a day is clear: We know that one day the workers who struggle and act in unity and solidarity will put an end to exploitation.

We will get rid of the parasites.

We will put an end to exploitation.

We will establish a world where the people who have nothing but their labour will share all the wealth they create together.

We will put an end to the rule of those who post their own photos while enjoying their seaside mansions to the faces of those who cannot “stay home” because they have to work to avoid starvation even during the days of the pandemic.

Long live our future bright days as we will put an end to the exploitation, and establish an enlightened country and a world without borders.