The Communist Party of Turkey (TKP) released a statement on October 29, the Republic Day in Turkey, as today marks the 96th anniversary of the foundation of the Republic of Turkey 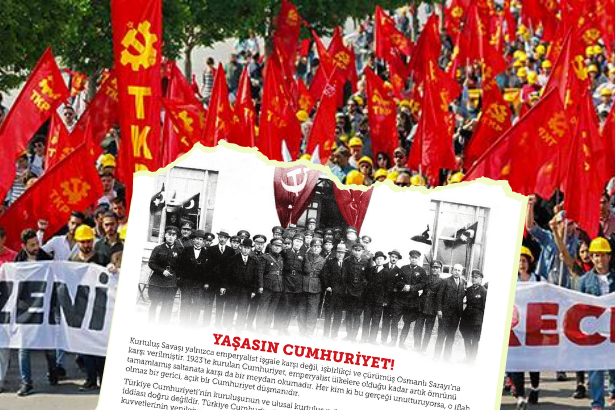 The Communist Party of Turkey (TKP) commemorated the 96th anniversary of the foundation of the Republic of Turkey. In its statement for the Republic Day in Turkey, TKP has called for uniting under the party to establish a new, socialist republic against the capitalist and reactionary forces that liquidated the republican values.

The Turkish War of Independence was not only fought against the imperialist occupation but the collaborationist, obsolete Ottoman dynasty. The Republic established in 1923 was a challenge to the imperialist countries, as well as to the dying sultanate. Those who try to fall this truth into oblivion are the incorrigible reactionary forces and apparent enemies of the Republic.

The Republic of Turkey was established in consequence of a revolutionary struggle that took the military, political and economic support of the Soviet Union that had been founded with the October Revolution in 1917. The revolutionary goals of the time united the Bolsheviks and the Kemalist movement struggling against imperialism in Anatolia.

Today, the AKP government is not solely responsible for the liquidation of the Republic established in 1923. Retrospectively, we are facing an uninterrupted line from Süleyman Demirel to Turgut Özal, and from Kenan Evren to Adnan Menderes. This is the line of Turkey's bosses, the capitalist class that has left its mark on the Republic since 1923.

The bosses have trivialized, decayed and liquidated the Republic.

The notion of Republic will not rise again with commercial films of the exploitative classes, nor with balls or receptions, but with the struggle of the working people. Turkey did not surrender to imperialism and reactionary forces in 1919, so never will it accept the hegemony of international monopolies today.

A new Republic will arise from labor against capital, patriotism against imperialism, and enlightenment against reactionary forces.

Let's unite forces, let's join forces under TKP to establish a new Republic, an independent and sovereign SOCIALIST REPUBLIC in which there will be no exploitation of human by human.