Communist Party of Turkey (TKP) Labor Center published the 2020 Minimum Wage Report. The Report is titled as “A decent minimum wage compatible with human dignity is possible in a social order without bosses” 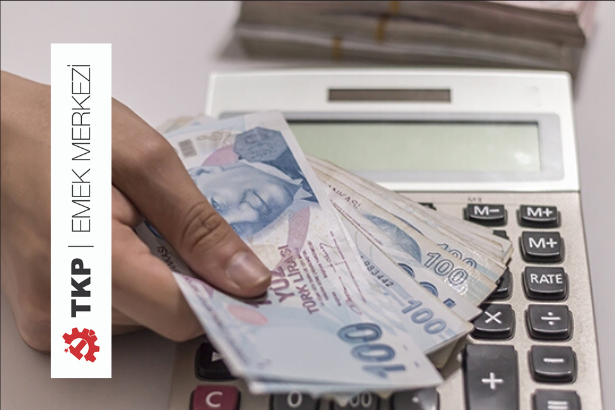 A report on the recently determined minimum wage was published by TKP Labor Center. The Center, in the report evaluating the new minimum wage in Turkey and the negotiation process for the wage, underlined that “a decent minimum wage compatible with human dignity is possible in a social order without bosses.”

While the bargaining process of determination of minimum wage was continuing, both sides of the negotiation and the public heavily debated the issue. However, the minimum wage was not brought to a level exceeding the misery wage.

According to the report, the main argument of the government representatives and bosses was that minimum wage is not supposed to be a family wage and is determined as the necessary amount for one person only. According to this argument, it would not be possible to raise the minimum wage to the poverty line. Therefore, there was no need to consider the needs of a family. Government representatives also pointed out that they took into account the economic conditions of the country when determining the minimum wage.

TURKEY IS A COUNTRY OF MINIMUM WAGE WORKERS

Considering the number of formally employed with wages up to five percent over the minimum wage and about 1.8 million informal workers, it can be estimated that about 8 million and 361 thousand people are earning wages around the minimum wage in Turkey. This number increases to approximately 9 million if we take into account the fact that there was no increase in formal employment since 2017 due to the economic crisis and the number of minimum wage jobs have been increasing.

It is not possible to determine precisely the total number of minimum wage workers using either the Social Security Institution (SGK) or the Turkish Statistical Institute (TurkStat) data. The latest data about the minimum wage workers published by SGK is from 2017. TurkStat datasets have some biases since the information is collected based on surveys. However, even these datasets with limitations are not made available to the public with all the details. Micro datasets can only be accessed through an application process and in exchange for a fee.

The report emphasizes that the minimum wage which is expected to cover the basic needs of workers with families cannot even exceed the level of a misery wage let alone satisfying the needs of a family. This is due to collective bargaining process where bosses dominate the entire process of wage determination.

The minimum wage report prepared by TKP Labor Center can be summarized as follows:

-The net monthly minimum wage to be applied in 2020 was determined as 2325 TL. The increase in the net minimum wage for a single worker is 15.03 percent. This corresponds to an increase of 10 TL in daily minimum wage.

-Bosses got what they wanted from the minimum wage negotiations. They were asking for a wage of 2262 TL. The minimum wage was determined as only 62 TL higher than this number.

-Minimum living allowance (MLA) which is not even paid by bosses is included in minimum wage debates on purpose. The net minimum wage was increased to only 2104 TL if MLA is excluded.

-Taxes will continue to be deducted from the minimum wage. The net minimum wage received by workers who are married and with kids will begin to decline, starting from August because of the MLA arrangement. Family allowances will not be enough to cover the taxes with the existing income tax rates for married minimum wage workers. The difference between a single worker and a married worker with a non-working partner and without kids will be 81 TL in August.