TKP General Secretary: ‘It is not neoliberal policies that fail, but notoriously capitalism as a whole’

The Communist Party of Turkey (TKP) General Secretary Kemal Okuyan said that all analyses claiming that neoliberal policies have currently failed are fallacious, adding that what people are confronted today is the explicit dictatorship of the bourgeoisie. 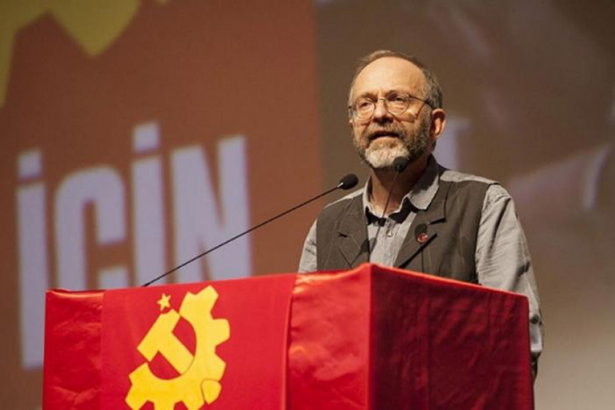 The General Secretary (GS) of the Communist Party of Turkey (TKP), Kemal Okuyan, answered the questions of journalist Erkan Yıldız for the weekly program broadcasted by the Voice of TKP, the daily podcast of the Party, evaluating the recent national and international agenda.

Focusing on the motivations behind the policies followed by the ruling Justice and Development Party (AKP), the program covered the process of COVID-19 pandemic, the current economic and political crisis in both Turkey and the world, removal of the three politicians’ parliamentary status, and the developments in Libya and the US.

TKP GS Kemal Okuyan stated that the first trap in the current economic and political crisis in Turkey is the indoctrination imposed on people by suggesting, ‘‘If we stand the gaff, the society will also get out of a jam.’’

The second trap, according to Okuyan, is the illusion that the contemporary anti-labour and profit-seeking policies have an alternative form under the current capitalist system without overthrowing the existing social order.

Kemal Okuyan noted that some intellectuals insistently describe the recent deadlock within the system as ‘‘the crisis of neoliberalism’’ or ‘‘the failure of neoliberalism’’, but such arguments are nothing short of vindicating capitalism, indeed.

‘‘When you define the crisis as the ‘failure of neoliberalism’, you actually mean that capitalism can evolve into another direction with a revisionist perspective if neoliberal policies have failed,’’ Okuyan added.

Underlining that such kind of argumentation, which emphasize on the necessity of ‘‘reformation’’ of capitalism, is the greatest lie ever told, TKP GS Kemal Okuyan said, ‘‘It is not neoliberal policies that have failed, but notoriously capitalism as a whole.’’

‘‘If we, as a communist party, define our struggle as a movement against neoliberalism, we would talk nonsense,’’ he continued.

Stating that the capitalist system is on the verge of a downfall today, Okuyan told, ‘‘On the other hand, this system will not collapse on its own. Therefore, as many people as possible have to strengthen a common will voicing, ‘This social order must change!’ ’’

‘‘The change in capitalist world order will take place under the leadership of an organized labour movement, so this movement pioneered by the working class will also fight for today,’’ Okuyan pointed out.

‘TURKEY’S PARLIAMENTARY OPPOSITION RELIES UPON ELECTIONS WITH ALL ITS POWER, AS THE AKP TAKES STEPS TO NULLIFY THE POLLS’

Kemal Okuyan remarked that the ruling AKP is trying to act according to the daily developments in domestic politics and foreign policy, unlike the parliamentary main opposition in Turkey.

Indicating that the removal of the three opposition politicians’ parliamentary status should be handled within this context, Okuyan also underlined that the parliamentary opposition in the country totally relies upon the elections with all its power, while the AKP takes particular steps to nullify the polls.

Berberoğlu was sentenced to 25 years in prison in 2017 on the charges of espionage for providing daily Cumhuriyet newspaper with a video showing Turkey’s National Intelligence Organization’s (MİT) trucks carrying weapons to Syria. He had been released in late 2018 and re-elected as an MP.

Erdoğan wrote on Twitter that he was reversing the decision on grounds that it would have diverse social and economic consequences.

‘‘I did not find it in my heart to allow our citizens who started to re-organize their daily lives after a 2.5-month break, to suffer,’’ the Turkish President had also noted in his statement.

Evaluating this two-day weekend curfew cancelled by the President Recep Tayyip Erdoğan saying ‘‘I didn’t find it in my heart’’, Kemal Okuyan highlighted that Turkish President’s surprising decision is a result of the AKP’s Islamic-rooted regime presenting the people’s fundamental rights as if ‘grace’ bestowed to society, and its administrative failure to rule the country.

‘EXPANSIONIST TENDENCIES OF TURKEY’S CAPITALIST CLASS SHOULD BE TAKEN SERIOUSLY’

TKP GS Kemal Okuyan, speaking about the current position of the AKP in Libya, drew attention to the experience that the political power in Turkey has gained regarding the expansionist tendency of the capitalist class of the country.

Noting that left-wing and progressive movements should treat capitalism in Turkey and its expansionist tendencies seriously, Okuyan concluded his remarks by saying, ‘‘Socialism to breathe!’’

Turkish parliament had approved a security and military deal with the GNA last year on the heels of a controversial maritime agreement in the Eastern Mediterranean, which would pave the way for the creation of an exclusive economic zone in favour of Ankara, seeking to use its influence over the Sarraj government to expand the scope of Turkey’s drilling activities in the Mediterranean.