TKP: "Erdoğan made his decision, now people will make their own"

TKP released a statement on the decision to re-run Istanbul elections, saying "Erdoğan made his decision, now people will make their own" 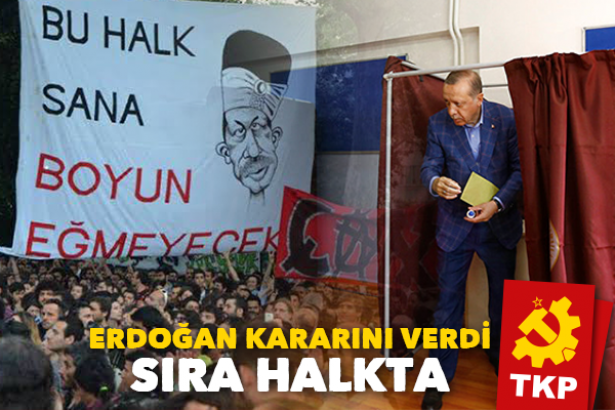 Communist Party of Turkey (TKP) released a statement on the Supreme Election Council's decision to cancel and re-run the municipal elections in Istanbul.

Stating that despite having political and ideological opposition, TKP already announced that İmamoğlu was the elected mayor of Istanbul, the statement says. It further adds that the recent decision of the supreme council means taking away the right to vote of the people of Turkey and TKP will not allow the legitimate reaction of the people to turn into pessimism.

The full statement calling on the people to organize against these unlawful acts of the ruling AKP is as follows:

Erdoğan made his decision, now people will make their own!

YSK announced its decision. To be more precise, Erdoğan's decision to cancel the Istanbul elections, which were completed on March 31, is now echoed by the YSK. The fact that the decision is now made does not change that it is unlawful and unreasonable.

No one can say otherwise: This decision is not the decision of the YSK, it is Erdoğan's decision.

The indecisiveness that has lasted for more than a month is not election council's but Erdoğan's.

This prolongation of Erdoğan's decision-making process or finalization of his decision is reflecting the deepening political crisis and the weaknesses of Erdoğan, who rules the country arbitrarily.

Everyone in this picture has chosen their place: With the exception of the people who are said to decide according to their own will.

The issue is not anymore related to a democratic election, even in form, nor to the people's will.

Now, on June 23, ballot boxes will be put again for Istanbul Metropolitan Municipality. The right thing is to leave the party in power and the YSK alone in front of these ballot boxes.

Although we have a political, ideological and class opposition, we have already announced that İmamoğlu was the legitimate mayor of the city. We think that any approach to shadow this fact will be wrong.

The issue is not the mayorship, but the attempt of the political power to usurp the right to vote for everyone, which is one of the most important achievements of humanity.

The right response is boycotting this unlawful decision. We call on our people to support this attitude.

As we know that an ineffective boycott initiative will only benefit the ruling party, we will follow the developments and give our final decision accordingly.

In any case, TKP will act with a strong will. Zehra Güner Karaoğlu, the Istanbul candidate of our party, will not be a candidate in the re-vote that was announced to be held in Istanbul on June 23.

We call upon our people to organize in this deepening economic and political crisis and to struggle together with TKP which is the only option.

We will not allow the reaction of people against the YSK's decision to turn into pessimism. This decision of the ruling party is a sign of weakness, not strength.

Let's not forget: The people united will never be defeated!