TKP on earthquake in İstanbul: “What is unnatural is this irrational order” 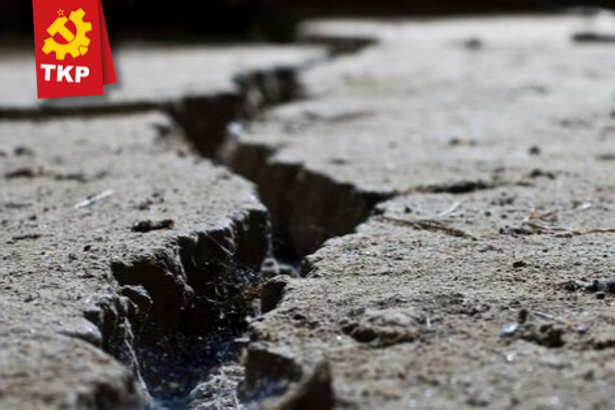 The Communist Party of Turkey (TKP) made a statement after the earthquake with 5.8 magnitude hitting İstanbul on September 26. The quake occurred in the Sea of Marmara, off the coast of Silivri, as some aftershocks followed the quake. The experts are anticipating a greater quake in İstanbul in the future as the people are facing a great danger under this exploitative capitalist order.

The recent quake reveals that the government has not been ready for a greater shock since the major earthquake that hit Turkey in 1999, killing around 17 thousands of people while leaving hundreds of thousands homeless.

TKP's statement on the most recent earthquake that showed how unprepared the country is is as follows:

EARTHQUAKE IS NATURAL, WHAT IS UNNATURAL IS THIS IRRATIONAL ORDER

The moderate earthquake that hit İstanbul yesterday has revealed that there is no preparation for the anticipated major earthquake in İstanbul, which has been on the agenda since 1999 as it has been occasionally abused as a showoff by the government.

In fact, it is apparent that İstanbul is in a worse situation than in 1999 against earthquakes. The number of emergency muster points where people can gather during quakes has decreased due to unplanned urbanization. The traffic problem has deepened. The urban transformation that is completely based on profit and rent has revealed some new infrastructural problems, let alone deliver solutions to unstable buildings. The people could not communicate via their mobile phones and their right to communication has been violated because the telecommunication monopolies did not make any proper investments in accordance with the increasing capacity although they rob the people with heavy bills.

The worst is we have seen that there is not even the slightest bit of coordination in the bureaucracy which has been turned into a jigsaw. The institutions that are directly related to quakes have made different statements, leading to an escalating panic among the people. This chaos has deepened since the central government abstains from acting in coordination with the İstanbul Metropolitan Municipality.

Doubtlessly, the government is primarily responsible for this situation. AKP has been in power since 2002, three years after the major earthquake that hit Turkey in 1999. It is not surprising that Turkey has become completely defenseless against the quakes and similar conditions considering that the country has been systematically distanced from science, logic, and justice in this period.

However, the problem is not only limited to the AKP government. It is impossible to see the market economy, today's capitalist order, in engagement with such affairs as planning, social organization, and equality, which are, however, what we need at utmost during the quakes.

Capitalism is a social order in which the money rules. The automobile companies that want to sell more cars and the construction companies that want to turn the entire city into a construction site predestine a city like İstanbul. Our universities, which should focus on scientific studies, are gripped by reactionary forces on the one hand, and giant holdings on the other. It is shameful that some academics who work for quake-related departments of universities also consult for construction companies at the same time.

Turkey must get rid of both this government and this order of plunder. The Communist Party of Turkey is struggling for this goal while it is getting prepared for reducing the burden of the people during a possible earthquake, and for reinforcing the culture of coordination and solidarity.