TKP declares: We will not hand our children over your reactionary policies! 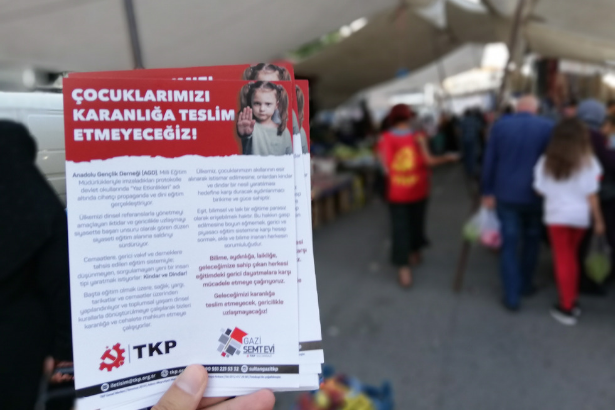 İstanbul's Sultangazi district organization of the Communist Party of Turkey (TKP) has initiated a campaign against jihadist propaganda and religious education veiled under the name “Summer Activities” in state schools by favor of the protocol signed between Directorates of National Education and AGD, an Islamist association correlated with descendants of the main Islamist movement until late 90’s lead by Erbakan.

Handing out leaflets titled “We will not hand our children over your reactionary policies!” TKP members called citizens of Sultangazi upon looking out for scientific thought, enlightenment, secularism and future of their children against zealotry. The pamphlets were distributed in the district market of Gazi neighborhood where in recent weeks Gazi District House of TKP has been launched.

A large number of residents of the county welcomed the handout eyes on. Most of the individuals stressed that they would never send their children to such events and that they would struggle against conceding of the schools to reactionist associations. People of the neighborhood are to gather in the coming days in order to discuss what could be done to not surrender to the education system reserved to Islamist organizations.

The declaration mentioned that the health system, the judicial system and mostly the educational system have been reorganized through religious groups and networks. It also emphasized that access to scientific and secular education is solely a right and that it is everyone’s responsibility to withstand against violation of this right.

The punchline of the call out reads as “We call on everybody who is looking out for science, enlightenment, secularity and our future to struggle against reactionist impositions in education. We will not concede our future to bigotry, we will not compromise with reactionism!”