As thousands of workers in Greece went on strike for their lives, health and rights, the Communist Party of Turkey and Unity Trade Union saluted the strike, expressing their solidarity with working people of Greece. 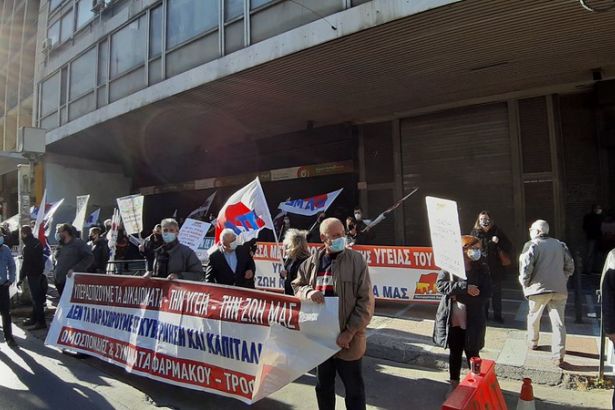 By the decision of National Federations, Regional Trade Union Centers and base unions in hundreds of workplaces across the country, thousands of Greek workers went on strike on November 26. All Workers Militant Front (PAME) declared that the strike has succeeded, with the participation of large workplaces, factories, with almost complete participation in public transport.

Communist Party of Turkey and Unity Trade Union released statements in support of the national strike, expressing their solidarity with working people of Greece and PAME. The full statements are as follow:

Dear Comrades and the Workers at the front,
We are passing through times when all the workers of the world are experiencing one of the worst and hardests times of the century. We are all aware that the worldwide capitalist governments have never considered the COVID-19 pandemic as an issue of public health, adding that these governments have turned the pandemic into a weapon in order to increase the profits of exploitative classes while suppressing the social unrest around the world.
We salute the justly struggle of the workers of Greece in the battle against the brutal anti-popular policy of the government in line with the interest of the bosses.
We declare our full solidarity with the General Nation level strike of PAME, organized for claiming immediate measures to protect the people’s health and to protect the working class's lives, and rights from the brutal attack of government and business groups.
Comradely salutes to the striking workers of Greece!
Long live internationalist solidarity!
Communist Party of Turkey
International Relations

To the PAME Leadership
Our class brothers and sisters, Dear comrades,
All around the World the pandemic has been turned into an excuse of the attacks on working class rights. In many countries, the governments and the bosses try to withdraw the historical acquisitions of the working class. The health sector being in the first raw, in many sectors the workers are forced to work under high health risks and are being oppressed by the threat of unemployment. Unfortunately some unions and confederations demonstrate a compromising attitude along with the governments.
Comrades, friends, we are neither alone nor desperate...The national strike which you have organized today (November 26th) with the slogan "Under the masks we have a voice and we demand!", in Greece, is the pure proof of that. We greet PAME, not only on the struggle against the recent attacks in Greece but also on the struggle to protect the historical acquisitions of the working class worldwide.
We salute yourselves and the affiliated unions of PAME, stating our solidarity with the general strike you are organizing.
Birlik (Unity) Trade Union in Turkey, keeps the path of struggle on our common issues, for which you are claiming our demands, this day.
Long live the class struggle!
Long live the internationalist solidarity!
BİRLİK SENDİKASI / UNITY TRADE UNION -TURKEY