Communist Party of Turkey has released a statement, urging the resignation of the country’s Minister of Labour after she claimed that “poverty is no more a problem in Turkey”. 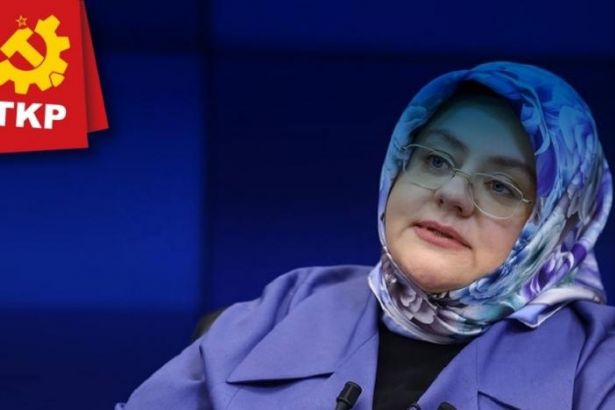 As Zehra Zümrüt Selçuk, Turkey’s Minister of Family, Labour and Social Services, faces strong criticism for claiming, “Poverty in Turkey, especially extreme poverty, is no longer a problem,” the Communist Party of Turkey (TKP) has called on Selçuk to resign immediately.

At the General board of the Turkish Grand National Assembly, speaking at the 2021 budget negotiations of the Ministry of Family, Labour and Social Services, Minister Zehra Zümrüt Selçuk, left  the questions of opposition parties unanswered, which brought up the suicides that increased due to poverty.

Ignoring the increasing unemployment and poverty with the pandemic process and the drift of workers and laborers into a debt trap, she said, "We have now moved to the stage of sharing the welfare.”

“Poverty, especially extreme poverty, as expressed in international documents, is no more a problem in Turkey. We care more about social aids aiming to share welfare and stand by our citizens in emergencies in this process. At some point, the number of our poor in social needs does not increase ” she claimed.

TKP responded to the statement of Minister Selçuk as she said “Poverty in Turkey, especially extreme poverty, is no longer a problem”. "She should resign immediately," TKP said.

The statement made by the Communist Party of Turkey is as follows:

You cannot challenge the poor people

The minister must resign immediately!

Zehra Zümrüt Selçuk, the Minister of Family, Labour and Social Services, made a speech in the Assembly yesterday, which was detached from the truth and mocked the mind of the people.

According to the Minister, Selçuk, poverty is no longer a problem in Turkey. Welfare is shared in our country.

In our country, poverty is getting deeper with each passing day, prosperity is being distributed unevenly and the wheels are turning to fill the pockets of a small minority.

In such a period when our citizens are driven to suicide due to hunger and unemployment, and laborers are forced to work under the pressure of virus and impoverishment, the Minister of Family, Labour and Social Services cannot make such a statement.

If she does, she can't be in that official position!

Because she confessed that she is not the representative of the working people, but the rich who seized wealth to increase their wealth...

Because she has once again made it clear that she is on the side of the bosses, not the workers and laborers...

In the same statement, she said that the Unemployment Insurance Fund does not belong to the workers, which is an indicator of which side she is on.

If the minister, sitting in that chair, does not feel the pain of the worker, who was taken on unpaid leave, and does not see the desperation of the laborer, who was unemployed in the pandemic, it means that she has lost her credibility for the pıublic.

She works for the bosses and acts as the representative of the bosses.

She is challenging the people by ignoring poverty and poor laborers.

The Minister of Family, Labour and Social Services, Zehra Zümrüt Selçuk, who gave the helm to the bosses in her ministerial seat and who could say "We have finished poverty in the country," under these difficult conditions, should immediately resign from her position.