Communist Party of Turkey (TKP) called for ending the cuts in electricity, water and natural gas immediately, and relieving the sufferings of all citizens. 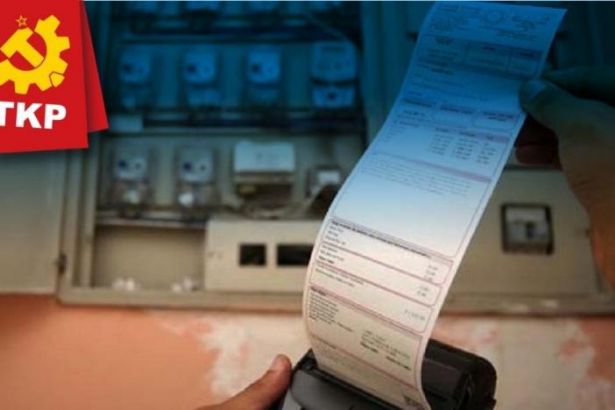 The Communist Party of Turkey (TKP) made a statement calling for ending the cuts in electricity, water and natural gas immediately. Saying that “While working people spend their winter in cold and without electricity due to their debts, we do not accept to pay the bosses another penny,” TKP underlined the need that the grievances of citizens must also be relieved.

We know that the main reason for high bills in electricity and natural gas is the robbery made by energy distribution companies. Bills have become a means of enrichment for bosses who leech off of public investments through privatizations.

Increases, cutting fees, meter usage fees and card refill fees must not have been sufficient for distribution companies that it is decided that many expenses, especially the representation, hospitality and advertisement expenses of electricity distribution and supply companies, will be charged to the electricity bills with the declarations published in the official gazette. Company expenses such as operating, communication, travel and accommodation expenses, staff travel allowances, dues paid for rooms and office expenses along with expenses of court cases, legal costs and attorney costs will also be added to the electricity bill of citizens.

While the bosses are expanding the robbery through bills, the laborers have become unable to pay the bills, and the electricity and natural gas of hundreds of thousands of households are cut off.

While working people spend their winter in cold and without electricity due to their debts, we do not accept to pay the bosses another penny!

Heating, water and electricity are basic human needs. It cannot be turned into a profit means for a small minority. It is clear what needs to be done:

1. All energy production and distribution companies leeched off of the people must be nationalized.

2. Electricity, water and natural gas must be provided free of charge to all wageworkers, peasants, tradesmen, retirees, the unemployed and the young.

3. The grievances of all citizens whose electricity, water and natural gas are cut off must be relieved immediately, and the cuts must be ended.

4. We call all working people to organize and stand against this robbery. Let's throw the parasites off our back, let's organize!