TKP in Antalya: "There is no way out of the system, so we will change it" 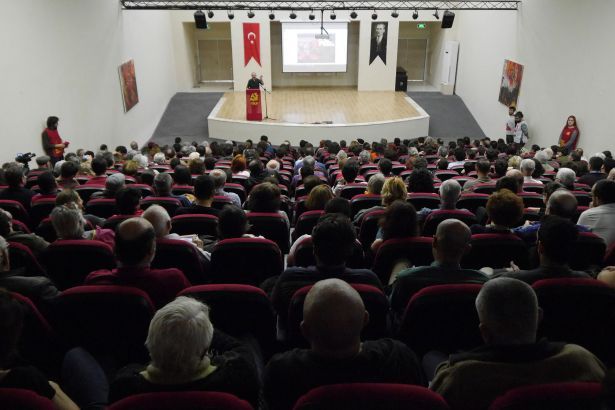 The Communist Party of Turkey (TKP) continues its country-wide "The People’s Alternative is Strengthening" meetings as it holds its latest in Turkey’s southern province of Antalya with the participation of TKP General Secretary Kemal Okuyan and journalist Enver Aysever.

Speaking to the hundreds of people that attended the meeting, TKP General Secretary Kemal Okuyan said that ‘"The fallaciousness of efforts to rehabilitate capitalism within the system has been demonstrated. We once again emphasize that there is no way out of this system. So we will change it."

Okuyan reminded that the richest 1 percent of the world's population owns wealth equivalent to the poorest 50 percent while billions of people live under poor living conditions and suffer from poverty and hunger.

Saying that it is not possible to rehabilitate anything under the conditions of man's exploitation by man, Okuyan emphasized, "There is no way out from this system. When there is exploitation, there can be no peace, no justice. We have to turn this [capitalist] system into a target in order to live a humane life, and we must show the willpower to change it."

Criticizing arguments that claim the capitalist system is so powerful that it can only be rehabilitated within the context of capitalism itself without a radical change, Okuyan also stated, "Are you talking about a capitalist system that cannot produce any alternatives to Recep Tayyip Erdoğan [Turkish president] for 15 years? Even the USA, the father of imperialism, presented an idiot as an 'alternative'. Is it this bourgeois order that you claim is so strong? For the moment, everyone is lying except for the TKP, because we advocate that this system of exploitation can be changed and that another sort of world in which people live under humane conditions cannot be established within the capitalist system. We say that it is possible. It can be difficult but it is certainly not impossible."

"Nationalism means ignoring the mistakes of one's own race. Yet, patriotism means defending your country against all kinds of imperialist plans and fighting against collaborators even if they have been rooted in your own country," he stated.

Noting that Turkey’s communists under the roof of TKP are against both Turkish and Kurdish nationalisms, Okuyan said, "We are against those who collaborate with imperialism regardless of their nationalities."

"I want to emphasize a very simple fact: Humankind is good. If you know this fact and believe it, your side is the Communist Party of Turkey", Kemal Okuyan concluded his speech.

TKP's Ankara meeting: "We won before, we can win again"