The Communist Party of Turkey (TKP) has released a statement regarding the military offensive into northern Syria, on which Turkey carrying out ground attacks and airstrikes. Shouting "hands off Syria!", TKP says AKP and the US are partners in crime in Syria for the last eight years 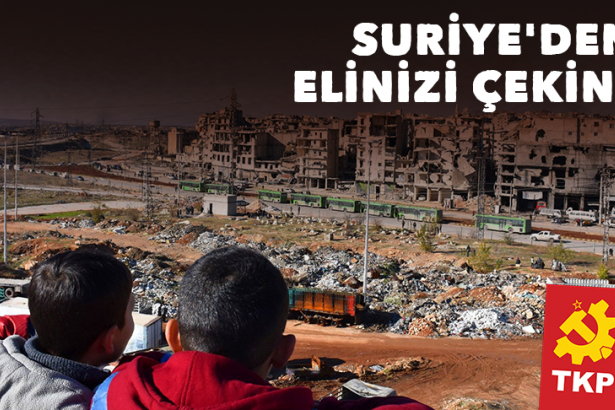 Syria has been suffering for eight years.

About eight years ago, anti-government demonstrations commenced in Syria. These demonstrations soon turned into an armed uprising and clashes in certain cities. Then together with the involvement of foreign forces, the civil war and the occupation of imperialist powers led by the US started.

Back then, U.S. imperialism’s plans for the Middle East were in effect. The AKP government was more than eager to play the role of the primary actor in these plans. The United States and the AKP started arming and training various groups against the Assad government of Syria. NATO, MIT (Turkish National Intelligence Agency) and the CIA all flock to Syria. Jihadist gangs were armed with the most modern weapons. Armies were established out of these gangs. Turkey took responsibility for the training of these armies. As if these were not enough, meetings were held in Antalya and İstanbul with the representatives of these gangs. The gang members were paid salaries by Turkey. AKP went beyond interfering in the internal affairs of our neighbor Syria and took on the role of directly provoking a civil war in Syria. However, the process did not unfold as predicted by the US and the AKP. The people of Syria resisted against the imperialist occupation and the reactionary gangs.

On the other hand, the people of Syria paid a very heavy price in these eight years. Syria has lost hundreds of thousands of people. Millions have been displaced. They were subjected to the medieval darkness in the middle of the 21st century. In some regions, the residents were subjected to the most savage barbarism and bigotry.

AKP HAS BEEN COMMITTING A CRIME FOR THE LAST EIGHT YEARS

Syria is still under actual occupation and is in a divided state. Jihadist gangs and their armed forces are still terrorizing certain regions.

AKP is committing a great crime for the last eight years. AKP disregards the sovereignty of another country.

They are overtly funding, training separatists, jihadist gangs and deploying them as armed forces within Syria.

AKP government along with the USA are the main criminals behind the human tragedy in Syria. This crime, on which they embarked together in the name of bringing freedom to the people of Syria, has opened a huge wound that cannot be healed for years not only in Syria but in the whole region.

AKP AND USA ARE PARTNERS IN CRIME IN SYRIA

Neither the AKP government nor the USA or any other imperialist force can bring peace to the people of Syria.

It is clear that the peace and freedom rhetoric by those who rely on imperialist forces, who see the solution in concepts such as autonomous government, locality, regionalism which are nothing but the product of imperialist strategies to divide the people, and those who rely on this or that nationalism are futile.

The decision for a peaceful and prosperous future only belongs to the people of Syria. The demands of the working people in Syria who have resisted the imperialist intervention for the last eight years are clear: Independence, sovereignty and territorial integrity.

AKP's operation today against a country, whose sovereignty it disregards under the pretext of Turkey's security, is unacceptable.

Additionally, the fact that this is justified with the claim of the return of the displaced Syrians to their homes is nothing but grand hypocrisy.

IMPERIALIST FORCES ARE THE REAL THREAT TO OUR SECURITY

The real threat to the security of our country is NATO, the US and the imperialist forces and those who insist on collaborating with them.

The peace in Syria can be established only when all imperialists and occupying forces withdraw from the region. It is the Syrians who can determine the future of Syria.

The Communist Party of Turkey