soL news has interviewed Kemal Okuyan, the General Secretary of the Communist Party of Turkey, as 10 September 2020 marks the 100th foundation anniversary of TKP. 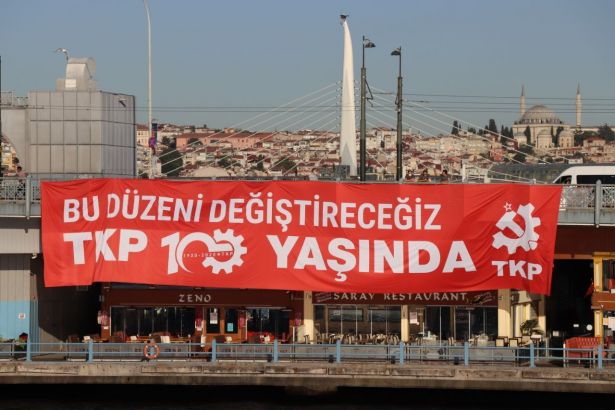 Today, the Communist Party of Turkey (TKP) is 100 years old. TKP was founded in Baku on September 10, 1920, a year after the foundation of the Communist International and just following the Baku Congress of the Peoples of the East.

As TKP is celebrating its centennial with various events around the country, soL news has talked with Kemal Okuyan, the General Secretary of TKP, on the occasion of the 100th anniversary of the Party.

In response to a question on the historical importance of TKP, Okuyan has said, “TKP is the earliest founded party of the country, yet it will never grow older,” adding that TKP had been founded three years before the establishment of the Republican People’s Party (CHP), the founding party of the Republic of Turkey.

“Not only in Turkey but all over the world, all the communist parties should focus on the overthrow of the decaying social order and establish a humane order. In this sense, communism has become a more urgent need than it was a hundred years ago,” Okuyan has said, in answer to a question on the role of TKP today.

Okuyan has also talked about the recent initiatives of TKP following the 13th Congress that was convened in August. The congress adopted some important resolutions such as the foundation of the “Unity” Trade Union, and the “Solidarity Assembly”.

The Solidarity Assembly released a founding declaration on September 8, undersigned by 56 founding members consisting of leading and prolific intellectuals of the country. The Assembly aims at “putting a class-based, left-wing and pro-enlightenment perspective against the ruling and opposition blocks acting within the frame of capital.”

In answer to a question about the recent initiatives, Okuyan has said, “TKP does not have any hidden agenda, nor any wish to retract or cover up its basic principles according to the changing circumstances,” adding that the conditions of the party membership and the party principles of alliances are very clear.

“Capitalism has no legitimacy and future for humanity,” Okuyan has noted, underlining that “TKP will never act on any political basis in favour of the existing social order,” in response to a question on the current political situation of Turkey and the world.