Three miners in Muğla were killed because of insufficient safety measures

Three workers were killed due to a collapse in a mine in Turkey’s Muğla on Monday, February 18; SoL news has investigated the reason for the collapse and who was responsible for the workers' death 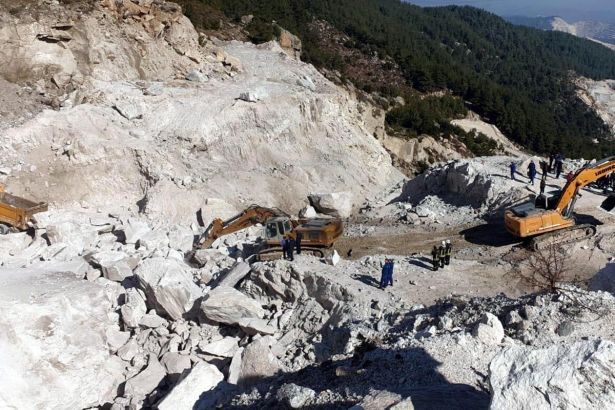 In Turkey, at least 1923 workers were killed in various occupational murders last year. Recent news from Milas district of Turkey’s southwestern province of Muğla has turned the attention to the mines and working conditions in the mines in the region.

As a result of a big collapse in a feldspar mine in Muğla on Feb. 18, miners Şükrü Otlak, Engin Tutuk, and Servet Çapacıoğlu lost their lives.

Covering the incident, the mainstream media has tried to conceal the owners of the mining corporation by using the phrase “a private mining company” in the news reported about the occupational murder. But, the real owner of the feldspar mine in Muğla is Toprak Holding, established by Halis Toprak who died in 2016 in France. Feldspar is known for being the backbone of the ceramic and porcelain industry.

Yet, Toprak Holding does not directly operate these feldspar mines. The mines are operated by a subcontractor company based on a royalty system. The feldspar areas which Toprak Holding transferred to Kömürcüoğlu Group in 2015 have been operated by this group since then. Kömürcüoğlu Group is actually a holding, including Rodos Maden (Mining), Efes Maden, and Çınartaş Maden companies. Kömürcüoğlu is a company that produced and sold 450,000 tons of raw materials in 2017.

MINE SITE WAS CLOSED FOR 1 YEAR

The mine site where three workers were killed had been closed down for a year from summer 2017 to summer 2018. It was closed down due to missing documents and the non-completion of necessary procedures, but it started its operations again last summer with legal authorization.

Talking to soL news, a mining engineer said “The giant rock called Yumrutaş in the mine site region is a natural rock that weighs hundreds of thousands of tons. The reason for the collapse does not stem from a recent problem, in fact. Mining works on this giant rock for many years have strained and exhausted it over the years. As a result of the combination of natural effects and the impact of these mining works on the giant rock, a gigantic mass ruptured from the parent rock.”

“Yet, it was a fact that the rock would collapse one day due to external interventions. If mining works are carried out under, or near, such a large-scale rock, it must have been known that the rock would collapse as a reaction to these external interventions with the effect of rainwater as well. The real reason for the collapse in the mine was negligence,” the mining engineer said.

Reminding that if certain measures were taken, this collapse would not happen, the expert noted that “There are also various precious mines in the rock called Yumrutaş, and the company is trying to extract mines from there.”

Stating the royalty system in the mining industry is based on a logic of ‘hit and run’, the mining engineer concluded: “The company wants to extract the maximum amount of mine within the contract date, and the safety measures are of the secondary importance. The mentality promoting maximum production in a very short time again lies behind this occupational murder in Muğla.”

IT IS NEVER AN ACCIDENT, IT IS MURDER

On May 13, 2014, Turkey had witnessed one of the worst occupational mass murders in its history. More than 700 miners had been trapped in one of the pits of the Soma mine, which had been a private lignite mine operated by the Soma Mining Inc. in country’s western province of Manisa. More than 160 other people came out of the mine with injuries while 301 workers were killed.

It is known that Soma Mining Inc. has driven great profits due to its strong ties to the ruling Justice and Development Party (AKP). Entering the mining sector during the privatization policies of the 1990s, the company became more powerful during the AKP government due to the legalization of the royalty system based on renting in return for a coal share.

Then-Prime Minister Recep Tayyip Erdogan had said the disaster in Soma was part of the “destiny” of mineworkers.

In July 2018, Alp Gürkan, the CEO of the Soma Mining Inc., was acquitted together with other 36 defendants.