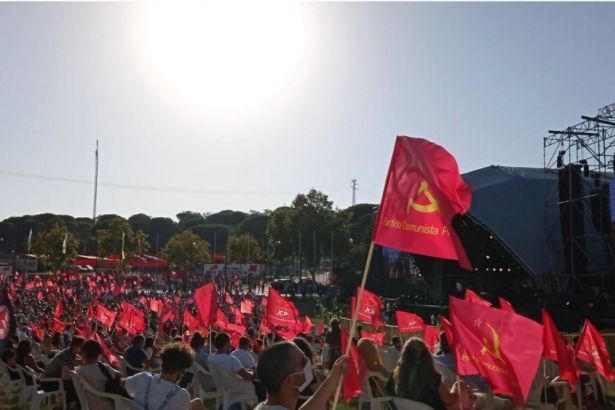 Despite all the pressures and manipulation by national mainstream media, government, and right-wing opposition, the Portuguese Communist Party (PCP) successfully gathered thousands of people in their yearly politico-cultural event, Avante Festival. Due to the pandemic, the PCP took all the necessary health measures to ensure a safe place for the participants.

Communist Party of Turkey (TKP) joined the festival, as in previous years, and held a stand in the international area. On the second day of the festival, TKP participated in a debate on the Middle East and shared its positions on Turkey and the region.

During his traditional Sunday speech, the general secretary Jerónimo de Sousa emphasized the importance of the National Health Service (SNS) and promised to fight in defense of the workers’ rights, condemning the media campaign and the pressures by the bourgeois forces against the festival.

In Portugal, due to the pandemic, hundreds of thousands of workers are in a lay-off regime. Also, unemployment and poverty drastically increased since the beginning of the pandemic. Under these conditions, Jerónimo de Sousa appealed the Portuguese people to participate in the actions that will be held by the General Confederation of the Portuguese Workers (CGTP) on September 26th in order to resist against the worsening of living conditions.