"Thomas Cook workers will not pay for the bankruptcy!"

Tourism workers in Turkey's Antalya, who were dismissed or are threatened by dismissal after the bankruptcy of the travel giant Thomas Cook, call on the workers to organize and struggle together 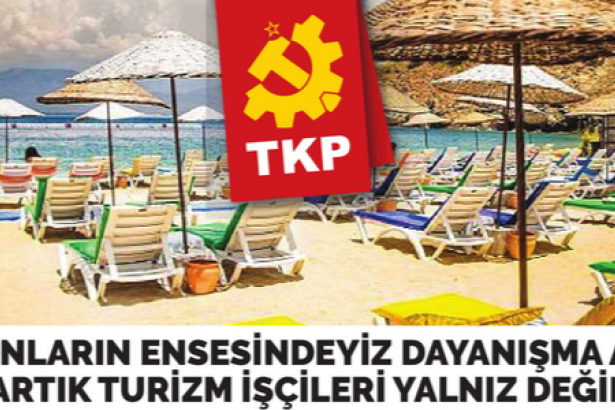 The British travel company and airline Thomas Cook declared bankruptcy in September. After the bankruptcy, 22,000 Thomas Cook workers, 9,000 of them in England, were laid off.

However, the number of people affected by the company's bankruptcy is not limited to 22,000 employees. When the hotels and agencies that work directly or indirectly with Thomas Cook are included, the situation affects a large part of the tourism sector.

About 3% of tourists visiting Turkey were coming through Thomas Cook as the company has a large market in the country with 29 hotels, especially in Fethiye and Antalya. In addition, there are many partnering agencies that perform regional operations.

After the bankruptcy, agencies working with Thomas Cook in Turkey stopped their operations. The number of guests in hotels has already dropped by 40-50%. Tourism workers have been dismissed by employers due to halted operations and vacant hotels. Those who continue to work are threatened with dismissal.

It is also reported that many workers are not being paid due to the bankruptcy of a giant corporation, which is no longer able to pay its debts.

TOURISM WORKERS IN ANTALYA CALLING TO FIGHT TOGETHER

Tourism workers in Antalya called on workers affected by the bankruptcy of Thomas Cook. The calling statement noted that the company managers have received £ 20 million in wages and bonuses in the last 5 years.

"When the company went bankrupt, the first move was to make the workers pay the bill. We, the workers, have been dismissed and we do not even know if we can receive our payments. Thomas Cook is not the first company to fail, and it won't be the last," the statement said.

"The crisis hits us, the workers who are trying to make a living. Let's fight against this irrational and unfair treatment! Let's not surrender to this bullying! It's not too late for us to claim our rights despite the documents we signed under pressure Come together, organize, fight!" the tourism workers added.

The statement also underlined that the solidarity network "We Breathe Down the Bosses' Neck" initiated by the Communist Party of Turkey (TKP) would always be in solidarity with the tourism workers.