Marina Gómez, who is listed as second in the European Parliament's list of candidates and was the secretary of the PCTE youth organization, talked about the politics of Spain and the stance of the communist party 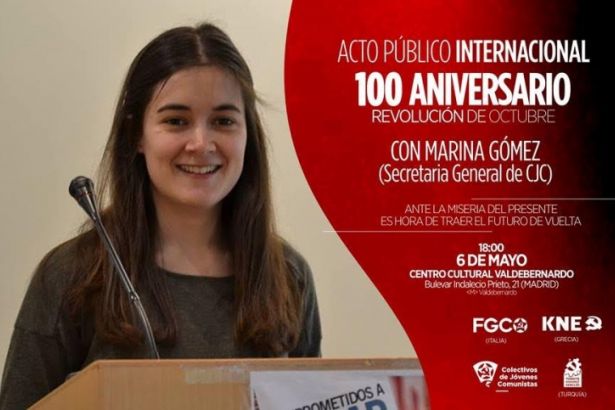 After an election process following a crisis, Spain has a political atmosphere in which politics is rising on calls of the bourgeois parties gathering together against the rise of far-right.

In Spain, where it was twice as difficult for non-parliamentary parties to participate in elections, the Communist Party of Spain (PCTE) organized a radical move in a short period of time by presenting candidates in the vast majority of the autonomous regions in the latest elections held on April, 28. SoL news talked to Marina Gomez from PCTE, who is on the candidate list for the EP elections.

In your statement after the parliamentary elections last month, you have mentioned that the working class has cast their votes “out of fear”, they voted to political actors that do not represent their interests. What was the reason and how do you think this will influence the EP elections?

Last April 28 General Elections in Spain were held under a new political scene. The two-party system made to rule the country by taking turns in the electoral periods between the two big parties – PP and PSOE – has been modified after the emergence of other political forces that complement these big parties on the right and on the left, like the parties Ciudadanos or Podemos. The prominence of the far-right party “VOX” has been increasing in these last months, especially after obtaining representatives in the elections of the Andalusian region. This increasing influence has caused the calls for the “useful vote” around the PSOE and for the “anti-fascist front” around Podemos to occupy a large part of the electoral speeches of social-democracy.

Thus the working class gets placed against an unreal dilemma, against a non-correctly posed dilemma. Thanks to this, a large quantity of votes have been dragged towards social-democracy. Towards the same social-democracy that legalized Temporary Work Agencies, that passed two labour counter-reforms, that made Spain join NATO, that supports coups d'état in other countries...

In this new electoral campaign, we are working hard to explain that such vote is useful, but it is useful just for capitalism. And that, on the other side, the only useful vote for workers is a vote which is consistent with their class interests.

You are saying that Euro was a great deception to Spanish people. How has the working and living conditions of the people in Spain affected in the past years? What was the impact on the workplace atmosphere, organizational cultures of workers?

This has an evident effect in job posts, as it becomes increasingly more difficult to face the increasing costs of food, clothes and housing (by the way, one market where prices never stop growing) with our salary. Besides, the advance in the privatization of public services, the reduction of the amount for pensions, will further worsen these consequences.

You propose a “rupture”, a break-up with EU. In which conditions should and can that rupture happen?

We understand the EU cannot be reformed, as the EU is not a democratic body created to favour the working class from all the countries that belong to it. Quite on the contrary, it is a body created by and for big monopolies, to favour the export of their products, to lower labour conditions and labour and trade union rights.

This is why we say there is no revolutionary stance that leads to an acceptance of the EU and does not firmly advocate for the break-up with this capitalist and imperialist structure. This break-up must be produced via an accumulation of forces in each country, and a strong common struggle among the Communist Parties that firmly hold this stance.

PCTE has entered the parliamentary elections last month with the new acronym. In a very short while your party has been able to collect thousands of signatures and received the eligibility for elections. Now immediately after that, you are proceeding with the EP and municipal elections. Could you tell us about the process? How are the reactions of people towards PCTE?

The electoral system in Spain is quite particular. Since a few years ago, political parties which do not have parliamentary representation shall get a percentage of signatures as endorsements to be able to present a candidacy to the general elections, which means an extra effort for parties like PCTE. Nevertheless, we decided to go out to the streets with all our militant forces and got more than 30.000 signatures to support our candidacies. This support allowed us to be present in 29 electoral constituencies and become the first communist candidacy in the country.

We have to largely thank the commitment of all the Party and Youth members who worked with decision in those weeks, but also to all the workmates, union companions, neighbours and so on who decided to support the Communist Party, the Party which struggles with them everyday, the Party who they shared struggles, strikes, mobilizations, union elections and meetings with, and which has a strong commitment for the defence of the working-class' interests, whatever the costs are. One example of this is the commitment showed when drafting the electoral list of the PCTE for the elections of the Autonomous Community of Madrid, which counts with a huge representation of work council members and trade-unionists from companies where we have intervened in the last years.