Textile workers from Turkey’s solidarity network PE distributed leaflets in front of the İstanbul-based denim wear exporter Cross Jeans to protest the company for the imposition of unpaid leave and the lack of job security amid the pandemic conditions. 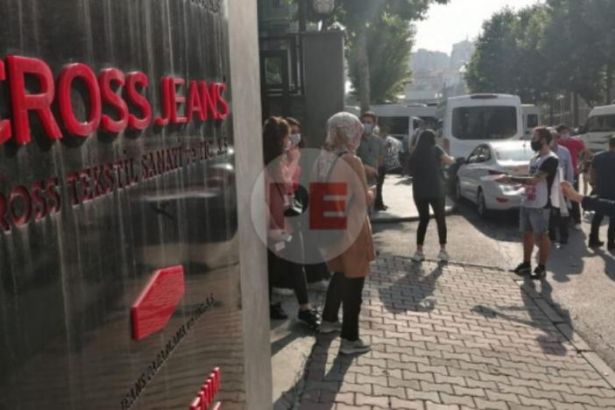 Textile workers from denim wear exporter Cross Jeans organized in Turkey’s solidarity network PE (“We Breathe Down the Bosses’ Neck), prepared a leaflet to distribute among the workers to protest the company for imposed unpaid leave amidst the coronavirus pandemic.

Cross Jeans is an İstanbul-based international denim wear company employing around 5000 workers in various cities across Turkey, and having sales organizations in such foreign countries as Germany, Poland, and Czechia.

After the first official cases of COVID-19 were announced in March, the workers from Cross Jeans were told that they would benefit from the short-time allowances of the Turkish Employment Agency (İŞKUR) as of March 23 within the measures of the coronavirus outbreak.

However, some of the workers were forced to unpaid leave without any payment or allowance since their insurance premiums were not enough for the last three years. Although the government decided to pay the 60 percent of the workers' wages for 3 months in order to support the employers due to the pandemic, some of them could not get any allowance because of insurance premiums.

The workers’ leaflet notes that some of their colleagues were forced to sign unpaid leave forms for an uncertain timespan, adding that most of the workers had to sign the forms so as not to lose their jobs completely.

The textile workers say that most of them may not resume working on the grounds that Cross Jeans company could not receive sufficient amounts of order, production and profit. Therefore, the workers face unpaid leave again as to whether they can receive short-time allowances from the government is still a question mark.

“We don’t want unpaid leave but our job,” the workers say, adding that if the company implements this plan, fewer workers will have to work for the same amount of workload while most of them will be forced to unpaid leave again.

The workers call on their fellows to join the ranks of the textile workers’ solidarity network PE in order to struggle against the bosses. Their leaflets were welcomed warmly among the other textile workers despite the warnings of the company’s private security guards not to take the leaflets.