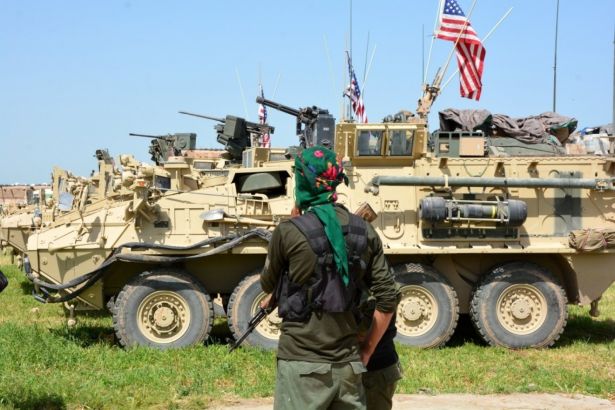 Troops from Kurdish militia units known as the YPG stand guard next to U.S. fighting vehicles near the Syrian-Turkish border.
  

A top Syrian Kurdish official on Wednesday welcomed the U.S. decision to arm Kurdish fighters with heavier weapons, saying it would "legitimise" the force as it prepares to march on Raqqa, the de facto capital of the Islamic State group.

Ankara views the YPG as the Syrian extension of the armed Kurdistan Workers Party (PKK), considered a terrorist group by the United States, Turkey and Europe. U.S. President Donald Trump has approved supplying arms to the YPG to support their fight against Islamic State in Syria.

Every weapon obtained by the YPG constitutes a threat to Turkey, Turkish Foreign Minister Mevlüt Çavuşoglu said on Wednesday. He said President Tayyip Erdoğan would discuss these issues with President Donald Trump when he visits Washington next week.

Turkish Prime Minister Binali Yıldırım said that a U.S. decision to arm the YPG would have consequences and a "negative result" for Washington. "There is still an opportunity for the United States to take Turkey's sensitivities into consideration. Otherwise, the outcome won't only affect Turkey, a negative outcome will also emerge for the United States," he told reporters.

U.S. Defense Secretary Jim Mattis said he was confident the United States would be able to resolve tensions with Turkey over the U.S. decision to arm Kurdish militants in Syria, saying: "We’ll work out any of the concerns."

"We will work very closely with Turkey in support of their security on their southern border. It's Europe's southern border, and we’ll stay closely connected," Mattis told reporters during a visit to the Pabrade Training Area in Lithuania.