58-year old senior Syrian doctor says the video was real, but did not show the effects of a chemical weapons attack. It showed something else 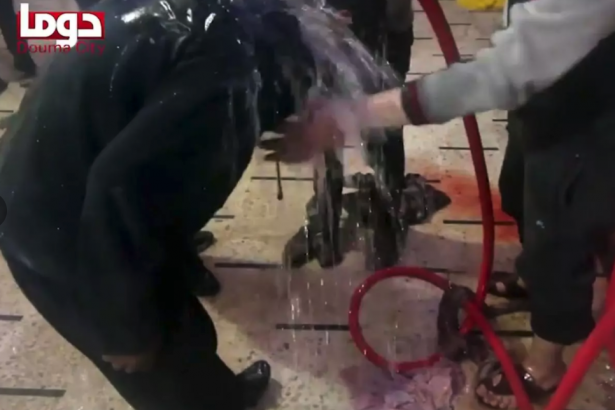 British journalist Robert Fisk visits the Syria clinic at the centre of the ongoing discussion about the alleged chemical attack in Syria's Douma. Finds children were admitted to hospital due to dust inhalation from shelling. Someone created a panic leading to water being thrown over people and the footage was captured by the White Helmets, who appear to be al-Qaeda's propaganda team funded by Britain and SAMS, funded by US State Department.

Veteran Middle East correspondent Fisk of Independent is the first western journalist to reach the area and speak to people there. One is a senior doctor at the clinic that treated victims of what a video purported to show were chemical weapons used by the Syrian government.

The incident was used as the justification for the air strikes launched jointly by the United States, the United Kingdom and France.

58-year old senior Syrian doctor Assim Rahaibani says the video was real, but did not show the effects of a chemical weapons attack. It showed something else. This is what the doctor is reported saying:

"I was with my family in the basement of my home three hundred metres from here on the night but all the doctors know what happened. There was a lot of shelling [by government forces] and aircraft were always over Douma at night — but on this night, there was wind and huge dust clouds began to come into the basements and cellars where people lived. People began to arrive here suffering from hypoxia, oxygen loss. Then someone at the door, a ‘White Helmet’, shouted ‘Gas!”, and a panic began. People started throwing water over each other. Yes, the video was filmed here, it is genuine, but what you see are people suffering from hypoxia – not gas poisoning."

His piece in Independent, Fisk also wrote: "Before we go any further, readers should be aware that this is not the only story in Douma. There are the many people I talked to amid the ruins of the town who said they had 'never believed in' gas stories – which were usually put about, they claimed, by the armed Islamist groups."

'PEOPLE GOT SCARED AND STARTED SPRAYING EACH OTHER WITH WATER'

On April 13 the Russian Defense Ministry has released a video interview of two young men who were on the ground at the local hospital where opposition media claimed victims of a 'chemical attack' were being treated.

The men said that panic at the hospital began after an unknown individual began shouting about a chemical attack as the victims of a residential building which had been hit by a bomb were being brought in for treatment.

The men, including Khalil Azizah, an ambulance driver at Douma Central Hospital, and another eyewitness, whose name was not revealed, said that the bombing victims were suffering from smoke inhalation.

"We were working and did not pay attention to who was filming us," the first eyewitness said. "They were filming us, and then a man came in and started screaming that this was a chemical attack… People got scared and started spraying each other with water and using inhalers. Doctors told us that there was no chemical poisoning."

Fisk’s account is corroborated by another reporter who is there, Pearson Sharp of the conservative news network One America. Taken on a tour of Douma by Syrian officials, the reporter said: "We were brought to one of the neighbourhoods close to where the attack happened. I spoke with a number of residents there, probably about 10 residents in that neighborhood…not one of the people that I spoke to in that neighborhood said that they had seen anything or heard anything about a chemical attack on that day."

He continued that all the residents said that the attack was staged by the jihadist militants.

MEDIC SAW NO PATIENTS WITH SYMPTOMS

Syrian state TV did interviews with nearly a dozen doctors and medics who say they found no trace of poisonous gas in the town of Douma. The program ran late Sunday and was posted on the Facebook page of Al-Ikhbariya TV. The individuals interviewed say they were in Douma on April 7, when the alleged attack took place.

One medic says he heard someone scream "chemical!" but saw no patients with symptoms. Others said dust seeps into underground shelters, causing choking and other symptoms associated with chemical attacks.​