Suspects of train crash that killed 9 in Turkey got promoted

Among the suspects in the high-speed train accident in Ankara, where 9 people lost their lives, state railways executives were promoted after the accident 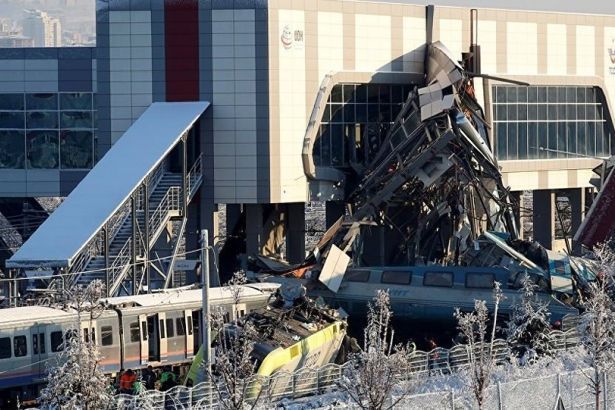 A Turkish high speed train collided with another locomotive and crashed into an overpass at a train station in the Turkish capital city of Ankara on 13 December 2018, killing nine people and injuring nearly 90 others.

The indictment prepared for the train accident in Ankara included 7 state railways executives as suspects.

It was decided to separate the files of 3 executives including the current general manager Ali İhsan Uygun on the grounds that an investigation permit was required.

As reported by Mesut Hasan Benli from Hürriyet daily according, the indictment stated that one of the suspects, the Deputy Director of Ankara high-speed train station, had not provided the required training to the switchman, one of the other suspects.

In the report of the Board of Inspectors, administrative ruling was requested for the deputy director, Kadir Oğuz, who did not appoint enough personnel to minimize any risks.

Despite the indictment and the findings of the Inspection Board, Oğuz was promoted after the accident, according to the sources.

Turkish State Railways General Directorate of Traffic and Station Management Department Branch Manager Recep Kutlay has been another name promoted after the accident. Kutlay was appointed as acting vice president.

The expert report in the indictment had stated that the newly established traffic management system was defective and Uygun was found to be faulty as he was responsible for the establishment of this system.