The students of Yıldız Technical University in Turkey’s Istanbul now demand the dismissal of the reactionary professor, Bedri Gencer, after their latest protest has resulted in the professor’s removal from a course. 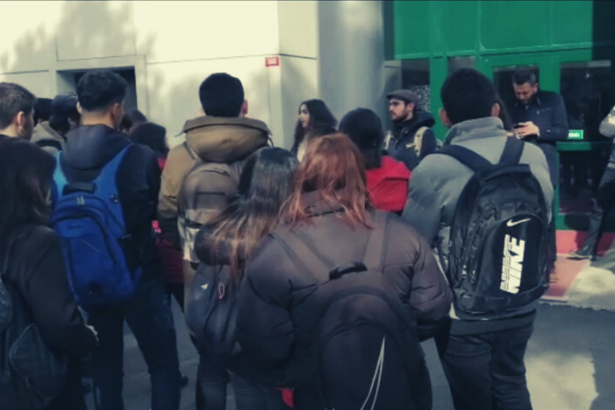 The Communist Youth of Turkey (TKG) has won its struggle against the reactionary professor at Yıldız Technical University (YTU). The sociology course that Bedri Gencer was giving to undergraduate students at YTU was given to another lecturer by the school administration after the protest of TKG.

Bedri Gencer, a professor at Yıldız Technical University (YTU) Faculty of Arts and Sciences in Turkey's Istanbul had made a post on his social media account, on the 25th of January, a day after the Elazığ earthquake that claimed the lives of 41 people and left hundreds injured. Gencer claimed that banning marriages at child ages and describing it as sexual assault by law despite the order of the Quran would lead to disasters.

The reactionary professor, who has been working with YTU for a long time, is also known for his comments on divorced women, describing the women as “loose”.

At the beginning of the spring semester, the students of Yıldız Technical University, including the students from the Communist Youth of Turkey (TKG), organized a protest against the professor during his class.

TKG members declared that they would expel Gencer from the university, saying "You have no legitimacy to be in the university nor to teach.” After the declaration, they left the class with other students.

Communist Youth of Turkey: We don’t have any lesson to learn from reactionaries!

WE ARE HERE AGAINST REACTIONISM, WE WILL CONTINUE TO DO SO!

After their protest at the beginning of the semester has resulted in a gain, the students of YTU started to collect petitions last week, demanding Gencer’s dismissal from the university. The number of petitions submitted by the students to the university president’s office for Gencer's dismissal reached 500 as of 19th of February.

The Communist Youth of Turkey made a statement after this step, saying "We are here against reactionism, we will continue to do so!

Last week, we protested the class of the reactionary professor at Yıldız Technical University. Then, together with hundreds of our friends, we have petitioned for this professor, Bedri Gencer, to be disqualified as an educator and we continue to do so.

The symbolic protest that we have made has resonated within every level of the university, and we learned earlier this week that the course he was giving has been taken away from him! We have taken one of the platforms where Bedri Gencer was making his reactionary propaganda away from him. On the other hand, we know that even though the university administration took away Bedri Gencer's sociology class after the protests, they still can give him other classes in the future unless he is expelled from the university.

Although Gencer's removal from the course is an important step for YTU students, we will not content ourselves with this and not compromise with reactionaries on any ground!

University administration's decision shows that we agree that this man should not be teaching. If so, the administration must take action. Gencer should also be sent away from the university.

The university administration needs to explain the course of the investigation declared to be launched.

Until these demands are met, we will continue to gather side by side with our friends, to petition, and to follow the petitions that we gave.

We are here against reactionism, we will continue to do so until Bedri Gencer is dismissed!