Metalworkers in Turkey continue their struggles as the economic crisis deepens in the country and the collective agreement negotiations concerning 150 thousand workers continue. The workers also continue to organize under the solidarity network initiated by TKP 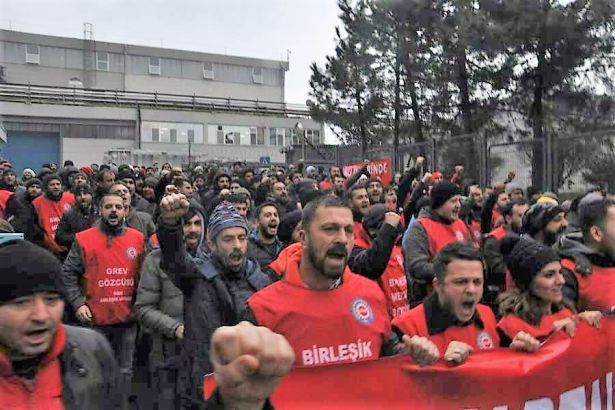 The negotiations with the trade unions continue in the MESS group collective agreement process concerning 150,000 metal workers in Turkey. The sustained economic crisis in the country continues to negatively impact the workers. The unemployment is increasing. The cases of layoffs in the manufacturing industry and of not paying to the workers are also increasing day by day.

The bosses in the metal sector, whose interest never shrinks and whose state-provided stimulus continuously goes up, most recently have come upon the collective agreement with revision proposal of the salary offer that would set the rights of the workers backward and make sure that the work-life totally becomes flexible.

Bosses will keep on with their aggressive stance against the workers adding in even new forms of aggression in this term. The insisting of MESS also raises the tension in the factories. Action preparations that would provide a response in the face of the insisting bosses have started.

“The Metal Workers Breathe Down the Bosses' Neck” solidarity platform which has begun pursuant to the initiative of the Communist Party of Turkey (TKP) resumes the preparation for strengthening the struggle of the metalworkers against the bosses. It has set its target to be reaching as much of factories and workers as it could. The periodical of the network is going to be one of the most important means in this respect. “Metal Workers Breathe Down the Bosses' Neck” is going to raise the voice of the metalworkers to the attention of more people via their social media broadcasts.

In addition to the MESS collective agreement, some local movements and resistances in the metal industry are also active. The most important among these has been the struggle in Eskişehir of Entil-Hapalki-Tarkon’s workers that belongs to the Zeytinoğlu capital group and that has been managed by the state via the Saving Deposit Insurance Fund (TMSF).

400 workers started a resistance in Eskişehir in order to protect their factories that are sealed after the debt crisis it has been dragged into and the salary and indemnities which they could not receive since then. Throughout the demonstrations workers initially planned in Eskişehir and İstanbul, “Metal Workers Breathe Down the Bosses' Neck” has supported them. It has been present in the march the workers started from Eskişehir to Ankara, the resistance booth set up in front of the factory and the protests conducted in İstanbul in front of TMSF.

Besides the collective agreement agenda of the metal workers, “Metal Workers Breathe Down the Bosses' Neck” will keep on organizing within and making sure the workers have victory as it hardens the workers’ fight in fields where workers struggle for salary or for unionization.