The government crisis in Spain for over six months gained a new dimension with the elections held yesterday, as the participation in the elections is falling while the rise of the right-wing is remarkable 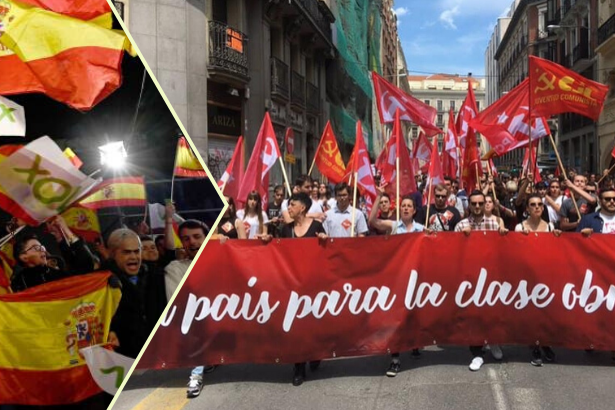 According to the results updated this morning, the participation rate in Spain's November 2019 general elections fell to 70 percent, 5 percent less compared to the previous April elections.

One of the remarkable results of the re-election after the government crisis has been that the Christian Democratic People's Party (PP) and the fascist Vox party, which participated for the first time in the last elections, increased their votes.

The "left block" PSOE and PODEMOS have a total of 146 seats, while the three right-wing parties, PP, Vox and Ciudadanos, have a total of 150 seats. Neither of the blocks can achieve the majority of 176 seats.

During the 21st International Meeting of Communist and Workers' Parties in İzmir, ICP had interviewed Astor García, General Secretary of the Communist Party of the Workers of Spain (PCTE). García commented on the political crisis in Spain and the position that the PCTE adopted. In the elections of November 10, the PCTE was present in 37 provinces, representing 72% of the total voters in Spain.

The special interview of the ICP with Astor Garcia is as follows:

What is the reason behind the political crisis in Spain? Does the Spanish bourgeoise have a relevant plan to overcome this situation? According to the last developments, what is the importance of the Catalonian issue in this context?

The political crisis in Spain has a very clear cause. At the moment, all the indicators show that a new economic crisis is approaching. The Spanish bourgeoisie, in the face of this situation, needs a government that defends its interests as firmly as possible. In the face of a crisis that is going to have an effect not only on the Spanish economy but also on the European and world economy, the Spanish bourgeoisie wants a government that defends the interests of the Spanish monopolies. Therefore, after the general elections in April, in which a clear majority did not emerge, and after several months of negotiations between the different forces of social democracy, such a government was not possible. The reason is not that the Spanish bourgeoisie feared that the new social democracy was interested in governing, but that the new social democracy does not guarantee the necessary stability so that the plans of the big capitalists can be carried out. That is the situation in general. Specifically, within this scenario, the situation in Catalonia also has to do with this reality. Because in the same way that the Spanish bourgeoisie needs a stable government, it does not need any kind of territorial debate that could call into question the unity of the Spanish market and the unity of the state, which is the one that best guarantees the interests of the monopolies at the international level.

We see that PCTE in a short time after its foundation managed to participate in the elections. A few weeks ago, after the EU Parliament approved the anti-communist Resolution, you wrote an open letter to Pedro Sanchez revealing his anti-communist and hypocrisy. Now you once again declare that the PCTE will participate in the upcoming elections. Is PCTE becoming more visible, what is the aim of the party about steadily intensifying its political interventions? Is Spain finally becoming a “country for the working class”?

Of course, the PCTE intends to become a relevant party on the Spanish political scene. In Spain for many decades there has not been a communist party that really exercised as such, which is an independent party, defending the interests of the working class against other sectors. In this sense, one of the main tasks is to denounce and reveal the maneuvers of the social democracy that plays with the sentiments of peoples and plays with the interests of the working and popular majority of our country in order to perpetuate capitalist power. Our attack, our open letter to Pedro Sánchez consisted fundamentally of visualizing the treacherous role of social democracy, in the face of the history of the workers' movement, in the face of the history of communism. On the other hand, it is true that in this period of time we have grown. As a party, we have more capacity for all tasks, including electoral tasks, and we have gone from presenting 27 candidates to presenting 37 in just a few months. We are now the principal communist force to present itself as such in the elections, and this is very important. Because of course, during the electoral campaign, but also during all the time and in all our political work, we have tried to explain to the working class and to all workers in Spain that it is a country is for the working class, which is fundamentally a country in which the interests that are taken into account are those of workers and not the interests of the exploiters.

How do you evaluate the developments in Syria? What do the bloody operations and secret negotiations say about the current state of imperialism?

To us, internationalism has always been a hallmark of communists. In this sense, we are very clearly a force that opposed the imperialist intervention in Syria. But at the same time we indicated that the situation in Syria is also due to a situation of inter-imperialist confrontation, also that instead of taking place or developing in the territory of the conflicting powers it develops in other areas where the conditions historically where the existence of important natural resources, the existence of a geostrategic position, made them the object of attack by different powers. In this sense at the present time, we fully share the position presented by the TKP, we support the whole campaign against Turkish intervention in Syria, under the pretext of terrorism or under any other pretext. We believe that the sovereignty of countries must be respected first and foremost and that in no case should there be a solution to the current situation in Syria without taking the Syrian people into account and simply by an agreement between different powers. That is a dangerous habit that will not be productive this time, against which we combat and fight.

How was the 21st IMCWP and in what way will this meeting contribute to the struggle of the world communist movement?

This 21st Meeting is very important not only because it is being held in Turkey but under the organization of two sister parties, two important parties, the TKP and the KKE, but also because it is being celebrated on the anniversary of the centenary of the creation of the Communist International. As we are going to indicate in our intervention, the communist movement, the communist parties present here are children of the Communist International. And that is why it was essential to celebrate and pay tribute to that organization and to the internationalism to which it responds. We believe that it is very important for the international communist movement not only to be able to speak about our opinion, our views about the different events that are taking place, but also to deepen the common analysis of the phenomena that today threaten the peoples of the world, the working class. It is precisely the analysis of imperialism, precisely the analysis of the history of the international communist movement, which today is called into question by, among other things, the anti-communist resolution recently adopted by the European Parliament, which means that we need to be more united organisationally, which it is necessary to advance in ideological unity. All initiatives that go in that direction are supported by our party and that is why we are here. We have a commitment to participate in such meetings.

Thank you very much.

Appeal of 21st IMCWP has been issued