According to the statement of the Independent Mine Workers Union, Soma mine workers in Turkey were assured to be paid the compensation pays they have been waiting for five years 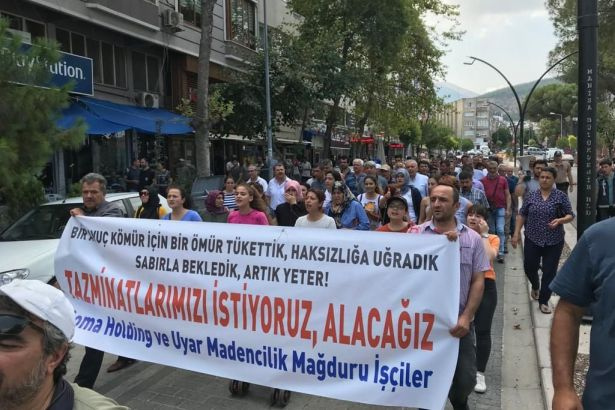 After a meeting with the Ministry of Energy and Natural Resources, the Independent Mine Workers Union made a declaration, saying that “the protest demonstration we started on 5 October continued until our unpaid allowances were paid. As a result of many talks, our delegation received an assurance of compromise and a largely agreed reconciliation was reached to pay for the compensation pays.

Turkey's Independent Mine Workers' Union said that their meeting at the Ministry of Energy and Natural Resources was positive and they were promised to be paid the compensation of Soma and Ermenek mine workers. Following the announcement, the union gave information about the details of the meeting in the march area in Manisa Kırkağaç Çam.

On the 32nd day of the march to Ankara, it was emphasized that their struggle for receiving the unpaid compensation for years concerning the 3500 miners will continue until they receive their rights.

A press release was made from the social media account of the union on the 33rd day of the miners' march to Ankara.

Mineworkers marching from Soma to Ankara for unpaid severance pays

The statement made by Soma mine workers is as follows:

After the Soma mine massacre on May 13, 2014, in Soma, the mine bosses carried out cruel and unfair dismissals in the quarries operated by Soma Coal Enterprises. While we were suffering, the mine bosses did not hesitate to profit from our anguish. They did not refrain from paying the salaries of the trialed workers so that they would not speak against them. The arrested mine bosses audaciously threatened the court by saying, "If you do not get me out of jail, I can not pay the workers' dismissals". While we are suffering, the mine barons did every trick and maneuver, to get their bosses out of jail. We didn't even see the faces of our lawyers at the court, whose fees were seized from our salaries.

Five long years have passed. After the establishment of our union, the issue of unpaid compensation was taken up. The protest demonstration we started on the 5th of October continued until our unpaid compensation was paid. As a result of many interviews, our delegation reached an agreement yesterday with the Deputy Minister of Energy Şeref Kalaycı and General Manager of Legal Affairs Süleyman Önay, which would provide a solution to the problems of Soma compensation victims and the families who did not receive their compensation in the Uyar Mining and Ermenek mining massacre.

After 33 days of uninterrupted action, our colleagues who have been dismissed will be able to get their payments as soon as possible, if they apply in person to TKI (Turkey Coal Enterprises) with a petition. These payments will be completed by January 2020 at the latest. Legal regulation will be issued for miners of Atabacası, Işıklar, and Uyar, and then they will also be paid by TKI. And when this problem comes to the Assembly, a joint motion will be submitted by the group deputy chairmen in the Turkish Grand National Assembly, to make the legal amendment as soon as possible.

Our struggle will go on until we see our payments in our bank accounts and then we will conclude in Kırkağaç Çam, but the village and district briefings will continue.

We will continue our struggle with a mass demonstration on December 4, World Miners' Day.