On the 261st day of their resistance, Flormar workers visited Cargill’s resisting workers 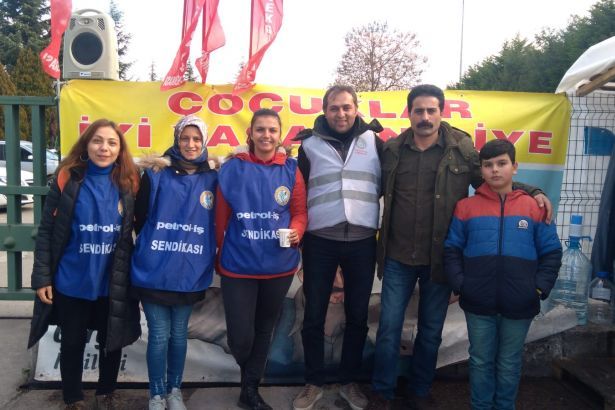 The cosmetics monopoly Yves Rocher’s Turkish partner Flormar's workers, who have been resisting for trade union rights for 261 days, visited the tent of the US-based sugar monopoly Cargill’s workers who are on the 287th day of their resistance.

Speaking during the visit, one of Cargill’s resisting workers Suat Karlıkaya stated, “Each resistance can have its own name, but it actually has one name: the resistance of the workers. We know that when Flormar workers win their resistance, the workers at the factory next door will know what to do. This struggle is ours, we will win this fight together... 14 of our colleagues were fired because they used their constitutional rights in this factory. You worked day and night in Flormar, no one raised a voice, when you claimed your right, you were put in front of the door. We will fight until we get what we deserve, not what is deemed proper for us.”

The Oil, Chemical, and Rubber Workers' Union’s (Petrol-İş) Gebze Branch President Süleyman Akyüz stated, “Two sibling unions are sharing the same fate... The common ground is that we are unionized. Claiming our rights... Our call to all non-governmental organizations, institutions, trade unions is: blow away the cobwebs, support the struggle of these people.”

During the visit, "Cargill-Flormar shoulder to shoulder", "We are workers, we are right, we will win", "Workers' union will defeat the capital", "Long live our honorable struggle", "We have set our hearts to this path, there is no return" slogans were chanted.

The 261-days-long resistance of Flormar workers who were fired because of being unionized in Gebze Organized Industrial Zone continues despite the bosses’ trials to break down the workers' resistance by putting up some unlawful and impertinent bans.

Workers who had been fired from a factory of Cargill for unionizing had reached their 287th day of resistance. Cargill had fired 14 workers under the pretext of “reduction” and “shrinkage” for unionizing in the Orhangazi district of the Bursa city. The workers had gone to the headquarters twice before but had not received any response.