SOCAR oil refinery in Turkey gets endorsement by presidential decree

Azeri state oil company's refinery in Turkey is to have special advantages in terms of investment conveniences, state-fund infrastructure and land expenses and minimised employer expenses by means of a presidential decree 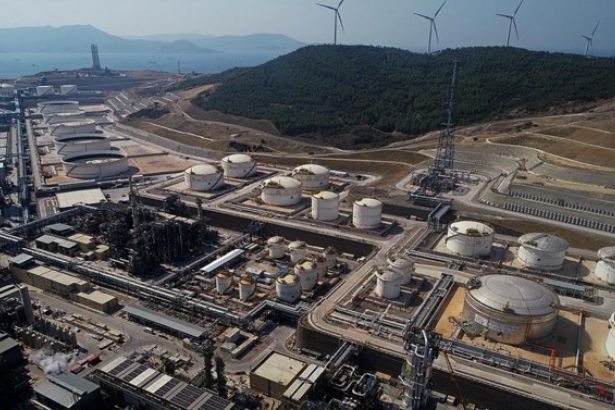 SOCAR began its activity in Turkey following the privatization of Turkey's state-owned oil refinery Petkim Holding in 2008 and has been operating under the brand name of SOCAR Turkey. Star refinery had been notorious in the Turkish public opinion with its anti-worker implementations in its refinery in İzmir, Turkey. Star refinery management had unlawfully restricted the workers' unionisation right in April 2017 and caused several cases of food poisoning in its construction site.

The title of the special industrial zone is to provide advantages to SOCAR in its new investments expected to reach 2 million dollars in the upcoming period. Mustafa Varank, Turkey's Minister of Industry and Technology, noted that the company will be able to handle its new investments "swiftly, without being delayed by bureaucratic obstacles" and that all processes and permits necessary for the investments will be monitored by the Ministry.

INFRASTRUCTURE AND LAND EXPENSES ARE TO BE MET BY TURKEY

By means of some regulations specific for Star refinery, Turkey's Ministry of Industry and Technology will meet infrastructure and land expenses of SOCAR in its new investments, provide necessary licences, nationalise privately owned land for the investments of the company and assume the whole expenses of such nationalisation.

SOCAR is also to benefit from some conveniences that minimise employer expenses like tax reduction and employee insurance premium reduction. The report necessary for any investment saying "environmental impact analysis report is not required" is to be provided to SOCAR within a two-month period before each investment.

As Turkey's crude oil imports were around 25 million tonnes in 2017, the figure is anticipated to exceed 30 million tonnes in 2019 with the full capacity operation of Star Refinery. While the debate on the potential impacts of the sanctions on Iran after November 4 still continues, it is claimed that the authorities of TÜPRAŞ, the biggest oil refinery in Turkey, have negotiated with the US President Donald Trump over exemptions from the sanctions against Iran.

A billionaire Azeri oil shipping tycoon Mübariz Mansimov, the owner of shipping conglomerate Palmali Group, was also revealed to have business ties with the Turkish President Recep Tayyip Erdoğan's family. Mansimov was revealed to have sold an oil tanker to Erdoğan family's offshore company in 2008.

Various local media outlets suggested in March 2017 that SOCAR had secretly purchased 7 oil tankers from Mansimov's Palmali Group and questioned whether Erdoğan family's 5 ships were among those sold to SOCAR. Later, as revealed by Malta files investigation in May 2017, SOCAR had bought 5 oil tankers belonging to the family of Erdoğan using offshore companies in the Republic of Malta same year. In December and January 2017, SOCAR took ownership and lent their name to one of Erdoğan's former ships and thus expanding their fleet of 30 ships.