Six of the columnists and executives of Turkey’s opposition newspaper Cumhuriyet daily were imprisoned on April 25, waiting for the petition to terminate the execution of their sentences to be evaluated 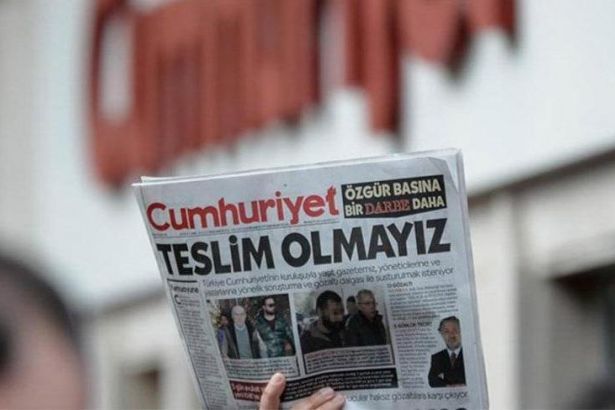 Six columnists and executive staff of Turkey’s opposition newspaper Cumhuriyet daily, who were sentenced to prison for less than 5 years in February last year, were sent to prison on April 25, 2019, after the court of appeal had upheld the decision in February this year. The Istanbul appeals court ruled that the previous sentencing was valid.

"An answer has come from the government that is expected to find solutions to all the crises: Throw the cartoonist back in jail!," Musa Kart, a renowned cartoonist, wrote on Twitter. "Yes, I am going back to jail. Take care of yourself."

After the finalization of the decision, the six people, Musa Kart, Güray Öz, Hakan Kara, Önder Çelik, Mustafa Kemal Güngör, and Emre İper, were imprisoned, while their attorneys yielded a petition to the court to terminate the execution of the decision.

Abbas Yalçın, one of the attorneys, noted that they were awaiting the response to the petition that was given because “in practice, there was something that does not fit the purpose of the decisional courts, which creates injustice”.

Yalçın also reminded that the file would definitely go to the Supreme Court, and maintained: “The file will not be a work overload for the Supreme Court since it will go for an appeal. In the trial with the same charges about the same actions, the file was examined for some suspect but not by others. And if the Supreme Court reverses the judgment, those who are currently imprisoned will have stayed in prison unjustly.”

Last year, the court had sentenced 14 staff of the Cumhuriyet on the charge of terrorism. The length of the sentences varied from 2,5 years to 7,5 years, and the court had then ruled that those who were sentenced to less than 5 years were to be imprisoned.