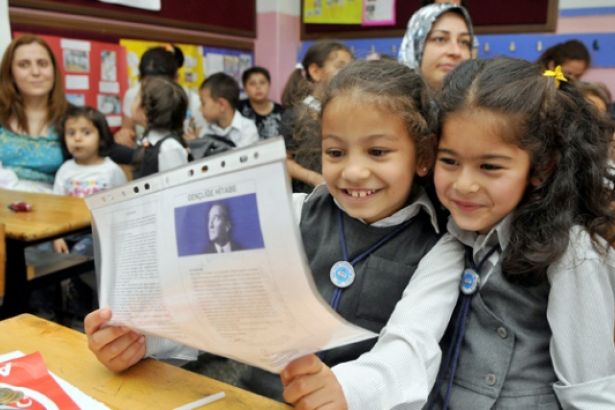 Eğitim Bir-Sen, the pro-AKP teachers’ union, declared its propositions on Turkish education system. The union demanded the religion courses to start in first grade of primary school, removal of the course titled ‘History of Revolution and Atatürkism’ from curriculum, addition of a course on the failed cuop attempt to curriculum. Several other suggestions were also involved in Eğitim-Bir-Sen’s report, including the addition of the July 2016 failed coup to the syllabus and the development of courses on reciting the Quran.

The union’s statement came after the Education Ministry announced that it had concluded efforts at renovating the schedule. While the reactionary attack of the ruling Justice and Development Party (AKP) to the education system proceeds, the pro-AKP teachers’ union Eğitim Bir-Sen has declared a new report.

The report titled ‘A belated report: Democratization of curriculum’ was presented by Ali Yalçın, the president of Eğitim-Bir-Sen and Memur-Sen (Confederation of Public Servants Trade Unions). The statement targets the Republican education system. The report stated that Kemalism should not be taught in middle class and high school. It also said that religion courses should be taught starting from first grade and that they should focus heavily on Islam, daily Cumhuriyet reported.

“The elites of the republic made the construction of a secular Turkish nation as an aim rather than a society with strong religious bonds,” the statement released by the union read, adding that Kemalism was “an understanding of education that doesn’t permit differences.”

“In other to reach their aims, religion was taken out of the constitution, religion, Arabic and Persian courses were taken out of the curriculum and the alphabet was changed in order to break bonds with the past. A modern education system was designed within the concept of a positivist understanding of science. There was an aim to raise human beings with a positivist understanding that humiliated religion and sanctified the mind and science,” the statement read.

Yalçın, while criticizing the Kemalist education of the foundation years of the Republic, which no longer exists, and describes it as ‘extremely ideological, uniform and refusing diversity ’; he proposes, instead, an Islamic education system with religion courses starting from the first grade of primary school.