In his latest article, SoL columnist and TKP Party Central Council member Aydemir Güler made comments on latest developments in regard to US-Erdoğan agreement on safe zone over northern Syria in light of recent history 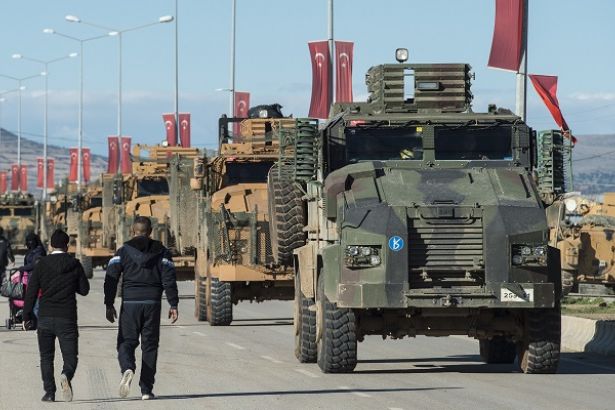 Efforts have begun on the Syrian-Turkish borderline for the strip called the safe zone. Turkish and American soldiers are in this together. That’s to say, pursuant to a protocol which is presumed to have been made with the US, foreign servicemen have come to Turkey. Their numbers are to mount, they say.

Back in the day, the US wanted Turkey beside itself, while in seeking of an intervention to Iraq, the other neighbor. It didn’t happen. “At least open your borders”, they said. This request became the substance of a resolution submitted to voting in the parliament in the year 2003. The renowned 1st of March Resolution couldn’t reach up to the qualified majority required. At the time, the authorities for Turkey were so dispersed that it took a little time even to comprehend and announce the failure of the resolution that March 1 evening.

If the resolution was adopted, the US would have had been entitled to use Turkish soil and airspace as it liked. When the resolution was rejected, the same US was entitled to put Turkey through the wringer for this result. The bag scandal (the columnist is referring to the incident that occurred in North Iraq in 2003 where some Turkish Spec Ops were arrested and put bags on over their heads by joint US & peshmerga forces), the privatizations and all…

There is a real major difference between the 1st and the 17th years of AKP governance! There is no need for a parliamentary decision for the US to use Turkish territory and deploy troops to another country through it nowadays.

The shakedown was “It is either your soldier or your border!” at the time. Dominant powers in secret desire for both could not even knock sole one off. Every progress that the capitalism makes is the same logic. Now Turkey both deploys military and opens up its borders.

Was it not the western imperialists when the crisis first emerged in Syria who continuously encouraged AKP for a buffer zone?

For certain there is an excuse now namely the PKK-PYD menace and it is the magic behind it. Yet PYD owes the utilities it has substantially to the US and AKP complains about it all the time. Well, complaining is not enough now, AKP has been telling that it persuaded the US to mutual endeavor “by force”. If we happen to remember about the Foreign Affairs Minister, there is a b plan, c plan and all… There is very little credibility in this thesis.

It does not even value as news that the US together with which we assumably prevent the terror menace increases its martial aid to PYD which AKP considers to be the top threat. Then it means the US is supporting terrorism and is taking precaution against terrorism at the same time!

It is not the first time the US does it. It is in fact what it takes to be an imperialist. The number of the horses you bet on in a lump has to correspond to your level in the imperialist hierarchy. We have to ask, does “greatness” of AKP’s Turkey have a resemblance in this sense? Could Turkey have gained capability to play anyone like a fish as an imperialist power?

It is more like an opportunism dance here… AKP seems a lot more like a drifter who shoots his wad into the horse race. The best resemblance it has to senior states is its unreliability.

Pentagon spokesperson sent its statement in respect to the matter to TRT (Turkish state media institution) “in writing”. The saying “verba volant” should be acknowledged now by Turkey’s allies thanks to AKP! They are now forced to read the written statement on TRT news. In the announcement, it is emphasized that the revival of ISIL is to be prevented by favor of the safe zone. Naturally, if preventing PYD was the priority of the US, it would have started with provision of military equipment.

It is already senseless to expect all the unreliable to be in accordance with one another.

Now, a 5-kilometer wide Turkish-American buffer zone is to be established. Turkey believes it is an obstacle against PYD, and the US believes it to be for ISIL. Refugees in Turkey are to be sent back to this line, they say. I wonder who these Syrians are that are willing to become human shields for foreigners in their own country!

Speaking of which, in Idlib environs where Syrian government accuses Turkey of not complying with its obligations, it is to be reminded that AKP stood for remnants of ISIL… Touching upon Syria, standing a legitimate government in Damascus, who cares! Who cares that Damascus alleged our safe zone lovers as invaders time and again! Still it has got to be said, Ankara exploits every opportunity now to mention that it seconds the territorial integrity of Syria.

The rumor goes, AKP included the US to the mutual plan by force. But Erdoğan happened to be stating that he seconds the latter in Russia-Ukraine conflict last week. In these circumstances, the gift box sent to Putin from Ankara is expected to be quite massive in value. Damascus staying quiet for all of this could be interpreted in this sense, maybe.

Turkish ruling powers intend to become imperialist. That is for sure. However, the games between imperialists, particularly in crisis times of the system, become slightly entangled like this and are played in boggy zones.

So we told that the resolution did not make it in 2003, the Iskenderun port was reserved to US military despite the failure later on. In few days, Communists showed up in the gates of the port…

It has been 16 years now. Who believes the patriotism is evanished, is dead wrong. Just like communism is not dead even if you repeat that it is over and over…