soL news interviewed Communist Party of Turkey (TKP) General Secretary Kemal Okuyan, regarding his party’s upcoming congress and the goals of Turkey’s communists on the 100th anniversary of the foundation of the TKP. Okuyan also evaluated Turkish President’s controversial decision to convert the Hagia Sophia into a mosque and his party’s stance against it. 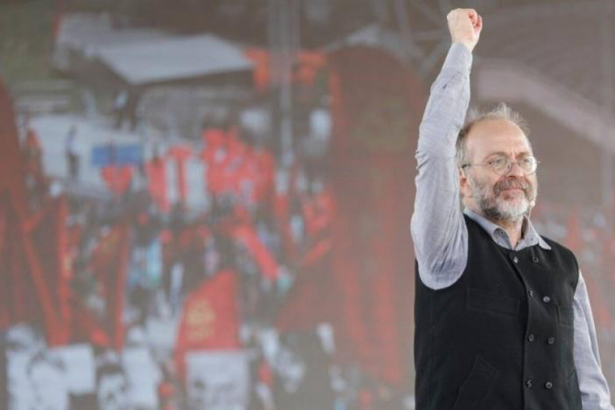 Communist Party of Turkey (TKP) will hold its 13th congress this year with the slogan, ‘‘the Revolutionary Party in its 100th years, the Party for the Revolution’’. So, what will be the main goals of TKP in the 100th anniversary of its foundation?

Our party actually has a sole goal: To end that capitalist exploitation in Turkey, and to establish an egalitarian social order. We make a great effort to strengthen this struggle for socialism in the 100th anniversary of the foundation of our party.

There is a wide segment of society that has lost hope about this corrupted social order but has still relied on humanity. Thus, the number of people who care more about us, pay attention more to us and want to join the ranks of the TKP is rapidly increasing. We are working from the bottom of our heart to meet the Party with them. September 10 is our birthday, and there will be wide participation of new members as we are preparing for the congress in our 100th year. In addition, we will increase the number of people and friends we act in unison in many titles. We are striving to become a more widespread, organized, inclusive, productive, effective and active political party as a decisive vanguard of the working class.

Besides, we review all the working areas of the Party. This year, we will also hold a congress. Congresses are very important to us for the policies to be followed by the TKP, because we discuss and report comprehensive assessments about the actual situation regarding Turkey and the world while reviewing and criticizing ourselves honestly and forthrightly, assigning the party members to assume responsibility within the Party as well.

So, you say there will be no race for the chairmanship of the Party…

Yes, there will be no such a race because our party does not have a ‘‘chairmanship’’ system anyway. We attach particular importance to collective working based on the functioning of party mechanisms in unity. Of course, individuals are important; some of us play more critical roles within the Party, but what is really decisive for us is our collective struggle. No one is above the Party’s struggle for socialism.

After Turkey’s ruling Justice and Development Party (AKP)’s decision to convert the Hagia Sophia into a mosque, you wrote an article criticizing the parliamentary opposition alliance – formed by the social-democratic Republican People’s Party (CHP) and its fascist partner İYİ Party (İYİP) - and its role in this reactionary move of the political power. After that, the TKP made a statement, underlining the will that refuses to collaborate with the political actors forming the bourgeois opposition favouring the Turkish government’s anti-secular, reactionary mind-set manifested itself once again through the Hagia Sophia. Can you detail this issue more?

I wrote that the ruling AKP’s move to convert the Hagia Sophia into a mosque for worship is an operation against the parliamentary oppositional alliance. Let me tell you very briefly: The government wants the opposition alliance to abandon and lose the social segments with strong secular sentiments. In other words, the political power in Turkey gives room for the parliamentary opposition, especially for the CHP, to carry out its current anti-secular strategy to the end.

The AKP was initially uncomfortable about the CHP leaning towards the right-wing. Even though the political power had made a great effort to change this ideological shift in the parliamentary main opposition, it has failed so far because the CHP administration is very bound and determined to keep its right-wing stance. And now the AKP aims to take advantage of it.

Although it seems that the nationalist or Islamist wings of the opposition alliance are easier to compromise with the Turkish President Recep Tayyip Erdoğan, they are more likely to fall apart to pieces in a harsh struggle against the political power. Therefore, the government strives for the elimination of Turkey’s secular segments resisting its Islamist project.    Precisely because of that our call is for these segments. They have been besieged by Islamization and economic difficulties. The current oppositional bloc in Turkey is one of the parts of this ‘‘siege’’ confining people to live in poverty and the political power’s reactionary mind-set.

We must always bear it in mind that there is no such thing: ‘‘Let’s comply with the capitalist social order, Islamic reactionism and NATO, but we should oppose Erdoğan…’’ The parliamentary opposition alliance in Turkey continuously tries to impose this idea on the people. Then, why are we against Erdoğan?

TKP calls on people to join the ranks of the Communist Party. If you are already a member of another political formation, let’s struggle together in line with the basic principles on the three key issues ─ imperialism, Islamization, and liquidation of capitalism. Yet, if they suggest us to comply with the European Union, some anti-AKP capitalists ‘‘supporting democracy’’, some anti-government Islamic cults and sects, or liberals, we will not be a part of such kind of rotten collaborations that would only pave the way for deadlocks instead of hope for the people of Turkey. As the TKP, we will do our part to enlighten the darkness that has reigned over our country. We will not render our people helpless.

Underlining that humanity has managed to overcome much more desperate periods throughout history, TKP says in the same statement, ‘‘As long as those who side with justice, equality and the enlightenment against obscurantism do their parts, humanity once again overwhelms the darkness created by the exploitative system of capitalism.’’ Have you had a chance to measure the public response to this statement?

I have to say that our party attracts great attention. This is not an empty propaganda sentence, nor an exaggerated optimism. I can even criticize our party that the TKP has not managed to avail itself of this great interest yet. All of our efforts is to eliminate the deficiencies and problems caused by us.

As of the 13th Congress to be held in the 100th anniversary of its foundation, TKP, for a stronger publishing claim, has decided to suspend its daily podcast, the Voice of TKP ─ which you have increased the number of broadcasting during the COVID-19 pandemic ─ and its weekly newspaper, ‘‘Boğun Eğme!’’ (Do Not Surrender!). What kind of publishing and broadcasting activities do you plan to continue in the new period?

Today, the voice of our party should be much stronger and it should reach more people. We reconsider our printed publications to improve and strengthen them.

Undoubtedly, digital platforms are becoming more and more important in the contemporary world. For instance, as a podcast, the Voice of TKP has reached the audiences every morning for a year and attracted great attention. Many members of our party have contributed to the preparation of this podcasting. Its audio recording, vocalization, montage, and promotion…Regular visual broadcasting and publication, streaming television…We are working on all these titles.

Yet, we have had a short break, not for a vacation, but for better and much stronger broadcasting and publishing. We will already be on the streets, workplaces, neighbourhoods to distribute leaflets and brochures. So, we will continue to raise our voice. Workers, impoverished peasants, the unemployed, intellectuals, students, craftsmen; TKP is your party! This also applies to communists loyal to the programme and targets of the TKP, who used to be organized within our party in the past but had to keep away due to certain reasons.