Return of Ottomans: Now it is Republic's turn

General Secretary of the Communist Party of Turkey (TKP), Kemal Okuyan, comments on the realization of the "Ottomanism" project of Turkey's ruling AKP and how the supporters of the Republic came into terms with this project 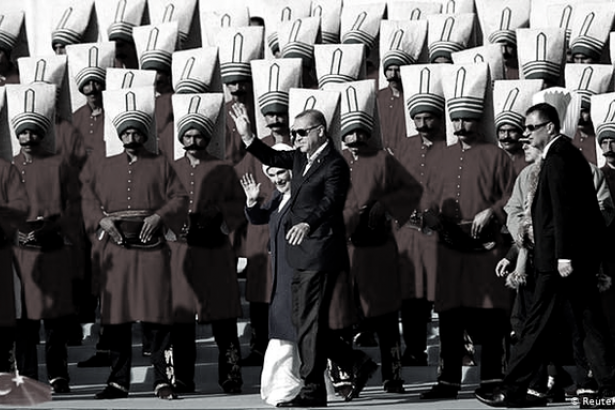 When we said that AKP was moving with a “New Ottoman” project in mind, some found it ridiculous. Those who thought it was impossible for Turkey to have plans in the region and to explicitly defend an expansionist doctrine had no understanding of how AKP moves, how the market rules work or how deep the crisis is in the world. They were acting as if nothing goes beyond the ordinary.

Then, it was seen that the "New Ottoman" project became real in both domestic and foreign policy practice; Erdoğan and his team were conducting consecutive experiments towards it.

This "New Ottoman" hit the wall in Syria. This has been seen by almost everyone. Those who found it ridiculous before, those who did not take it seriously, those who loved AKP or those who did not love came to the same conclusion: The adventure of "Ottomanism" has learned its lesson!

Gezi resistance, or more precisely, the June Resistance and the heavy defeat of the efforts to create a pro-Ikhwan rule in Syria were pointing in the same direction. The group that delivered the fatal blow to the Republic could not realize its own fantastic projects to replace the Republic.

They could not do it because there was a power impossible to overcome both inside and outside of Turkey.

We felt the need to add an important thing at this exact point. We said, "Turkey can not stand hanging in such an abyss for a long time. AKP is able to go neither forward nor back and we need to unlock this situation with revolutionary energy." If this did not happen, Turkey would sit on a new but ill-fated balance.

Turkey had failed to reach a balance, but they have managed to produce an "Ottomanist" project that will be helpful to the new Ottoman project. After AKP could not overcome the historical and social legitimacy of the Republic it has destroyed, people have been convinced to a new version that reconciled the Ottoman and the Republic.

This new version of "Ottomanism" does not belong to the AKP in its narrow sense. The big capitalists of Turkey, the state, and most importantly, the political actors claiming to represent the Republican social fabric in the political have carried out the operation together to reconcile the Republic and Ottomanism.

This operation is successful for now, it has not hit the wall or anything.

We have repeated at every opportunity: Which makes the period of 1919-1923 revolutionary in Turkey is not only the struggle against the imperialist occupation. Turkey's struggle for independence was a struggle to de facto end the occupation of Anatolia and to be integrated into the western system led by Britain by making Turkey to be recognized as a sovereign political unit. By pointing this out, some have argued that the War of Independence has no anti-imperialist character - which is a false thesis in the final analysis.

What we have to say is that the Kemalist movement's fight against a reactionist, backward, broken-down and rotten order embodied in the Ottoman Empire is as valuable as the struggle against the occupation.

The new version of Ottomanism is ignoring this fact and reducing the War of Independence to war against "external enemies" while it reconciles the Republic and Ottomanism.

Not long ago the liberals, the explicit or implicit AKP supporters, were praising the Ottomans and arguing that the Republic was pulling us away from our past. For example, there were those "leftists" who said before Erdoğan that the transition to the Latin alphabet was a decline. Now, they are temporarily discredited, some of them are in prison. But this time, widespread support for the Ottomanist propaganda is coming from the Republicans. The main opposition CHP has already been moving towards this way, but beyond them, a large segment of the population showing resistance to AKP has adopted this Ottomans-Republic of Turkey alliance against "external enemies".

"Scandals" happen when there is no class perspective.

Yes, the Ottomans came back.

Not only in our but in dozens of countries, hundreds of millions of people are watching the foolish TV series starring beautiful women, handsome men and proposing the claim that the Ottoman Empire made peace with the Republic of Turkey. Those who do not see a strategy here are part of the same foolishness.

For those who think they are the owners of the Republic and have been traumatized by the rule of AKP in Turkey for years, the Ottoman-Republic reconciliation has been presented as a solution. And it has been successful. They have sold both the Republic and the Empire at the same time to our people who are left without a solution in the increasingly severe economic crisis. Buy the Republic get the Empire free; two for the price of one!

At the beginning of the establishment of the Republic of Turkey, a new order, a new country was born out of another empire. The Russian Empire had been buried in history; Soviet Russia and then the Union of Soviet Socialist Republics was established with totally different goals.

Representatives of the old order were in the hands of the new order, the tsar and his family were already under custody when the Bolsheviks took power. While the revolutionary government of the Russian workers and peasants shot the remains of this empire after a while, they were taking the risk to be stigmatized with the ever-present barbarism, but they had to get rid of the shadow of the empire to rule. They were freed.

In the same period, in 1918, the Empire was overthrown in Germany. The German Revolution did not judge the Kaiser and sent him on a mandatory holiday abroad with his wealth. The Kaiser died, but his soul returned in 1933 with Hitler. They were not freed.

They said 2023, but they did it a little early. The return has been realized.

Now it is the Republic's turn to return with the working people, the only ones to keep it alive.