Workers at the textile factory TR İnter Tekstil have won after 11 days of resistance to receive their pays. The workers celebrated their victory with the members of the Communist Party of Turkey (TKP) 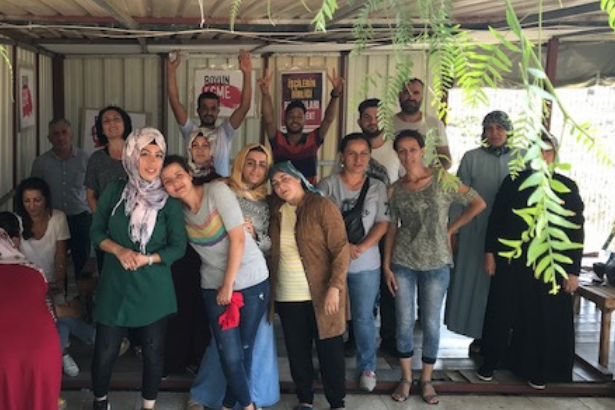 Workers at the subcontracting textile factory TR İnter Tekstil in Turkey’s İzmir city, manufacturing for the large textile company Uniteks, who were on strike because they had not been paid for months have received their pays.

Some of the workers were not paid for one and a half month, while others for more than 70 days. Seeing that neither their salaries nor the overtime pays were paid, the workers had gone on a strike.

Organizing with the Communist Party of Turkey’s (TKP) solidarity platform for workers, “We will Breathe Down Bosses’ Neck”, the workers held firm for 11 days and achieved their vested rights. Workers came to an agreement with the company’s lawyers and their pays for June and July, along with those until August 15, have been deposited into the workers’ bank accounts.

After they found out that they have won, the workers started celebrations which also included some workers becoming members of the TKP.

The workers stated that they were determined to continue the legal struggle in other rights such as severance pays and insurance premiums.

"NOW IS THE TIME TO CELEBRATE"

The workers' victory was announced through the social media channels of the solidarity network of TKP.

"Workers won in TR Inter Tekstil! Our resistance resulted in gain. Our salaries and overtime pays until June, July and August 15 were paid today. Now is the time to celebrate. Thanks to everyone who showed solidarity with us," the network wrote.

HOW DID THE WORKERS WIN?

TR Inter Tekstil workers started their resistance in front of the factory in İzmir's Buca on 19 August. They contacted with Deriteks Union and started to join the union. Solidarity Network supported workers' union membership.

As the workers continued their resistance, Üniteks made a written statement to the public and claimed that TR İnter Tekstil has no responsibility for the rights of the workers.

“We will Breathe Down Bosses’ Neck” network made a statement against the bosses, saying that "no one can escape responsibility in the chain of capitalists."

Üniteks lawyers who contacted the Network on the 9th day of the resistance demanded a meeting. A preliminary agreement was reached at the meeting, which was attended by a representative of Deriteks union and the lawyers of the workers' network. The workers were paid on the 11th day of their resistance, August 29.

The workers held an evaluation meeting with the Deriteks union officials after the payment of their receivables to their accounts and then held a celebration in TKP Kuruçeşme District House.