While the resistance of Flormar workers continues, TKP warns the bosses who are trying to break down the workers' resistance by putting up some unlawful and impertinent bans 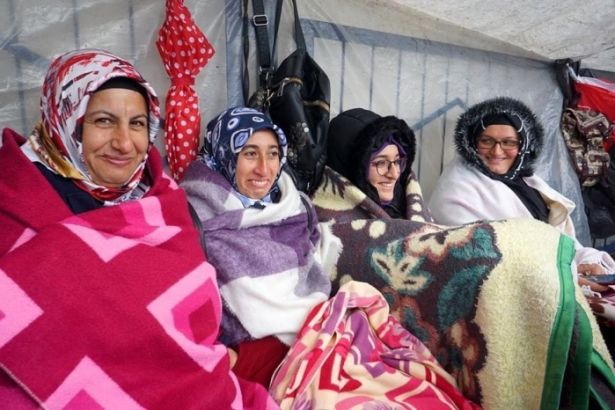 The resistance of Flormar workers in front of the factory who were fired for using their trade union rights in Gebze Organized Industrial Zone reached its 224th day on December, 24.

The new steps taken by the factory management to cut the communication between the workers inside and those resisting, the metal sheet plates hanging around the factory and the ban on the stove the workers use for heating have been the most important issues of the resistance in recent days.

While the resistance continues, Flormar's bosses are trying to break down the workers' resistance by putting up some unlawful and impertinent bans. The bosses, by bringing a "stove ban" in the area of resistance in the cold weather, continue oppressing the workers outside.

Communist Party of Turkey (TKP) Istanbul and Kocaeli organizations issued a joint statement warning the Flormar bosses. "We warn the authorities and are urging them to end the impertinent stove ban immediately," the statement said.

Stating that the aim of this ban is to break the resistance by playing with the workers’ health, TKP said that “if the workers in Gebze and Turkey’s working class, in general, see that the resisting workers win, everything will be more difficult for the capitalists. That is why the capitalists insist”.

“We are not surprised to see ugly moves from the capitalists, but torturing the workers with cold by banning the stoves in the resistance area is something we cannot stand. …And it is foolish to wait for the workers, who were not afraid of the bosses, to run away because they feel cold”, the statement added.

RESISTING FOR MORE THAN 200 DAYS

The workers of Flormar, a subsidiary of worldwide French cosmetics brand Yves Rocher, had been fired for unionizing on May 2018. The workers started to unionize in the Chemical and Rubber Workers’ Union of Turkey (Petrol-İş) in early 2018.

The company did not pay damages to the fired workers, and although it is very well known that the firings were because the workers had unionized, executives of the company told the press that the 115 workers were fired because they had “picked a fight” in the plant.

First, they dismissed 85 workers, and the number has reached 115. The workers still resist in front of the plant in Gebze district of the city of Kocaeli, and demand reemployment.

TKP has been supporting the resisting workers from the very early days; delegates, youth organizations, and the representatives from the workers’ solidarity and struggle network paid solidarity visits and the party organizations participated in the solidarity events organized by Nazım Hikmet Cultural Centre in İstanbul and Ankara.