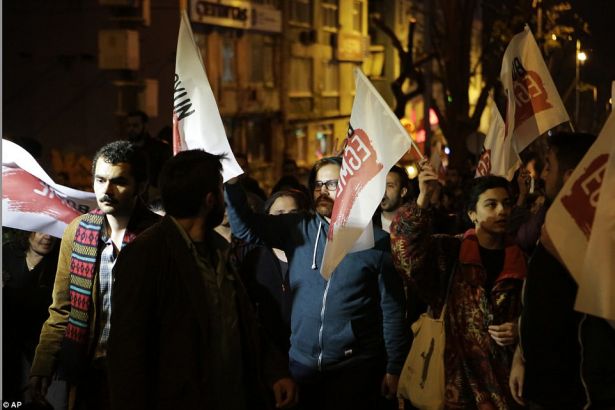 Protesters hold up 'No' flags, which read: 'Do Not Surrender'. This flag became a symbol of resistance against AKP government's oppression during Gezi protests.
  

Following the critical constitutional referendum on April 16, thousands of people took to the streets across Turkey to protest the fraudulent referendum results.

Despite President Recep Tayyip Erdoğan and his Justice and Development Party (AKP) declared “victory” in Sunday’s referendum, thousands of people who voted for ‘no’ continue to protest the fraudulent results of the referendum.

Thousands came together in İzmir, the third largest city of Turkey, where the ‘no’ votes reached almost 70%. The people shouted slogans and raised the voice of ‘no’ against the government which is attempting to steal the will of the people.

As many protests continued across the country on April 18, the police attacked the protesters in the southeastern city of Gaziantep. The police took 20 protestors into custody and attacked the journalists.

The governorate of Gaziantep announced to ban all the activities and meetings in the city for a month under the pretext of “public order and security”.

Many people protested the referendum results in the industrial city of İzmit upon the call of the youth organisation of the main opposition Republican People’s Party (CHP). The citizens held a press statement against the High Electoral Council (YSK) which made scandalous decisions during the vote counting.

Many people took to the streets in the western city of Çanakkale, where the rate of ‘no’ votes reached 60%. Thousands shouted slogans in the city, “It has not finished yet, this is just the beginning!”

The most populated metropolis of Turkey, where the ‘no’ campaign prevailed, İstanbul witnesses the biggest rallies following the fraudulent referendum. Thousands gathered in the central districts of Beşiktaş and Kartal to protest the government, shouting slogans “Thief YSK”.

Communist Party of Turkey: 'Surrender to will of people'