While gas-rich Qatar faces a Saudi-led international diplomatic isolation, whether the Turkish government will take a step amidst the crisis is a question mark since Qatar has become a hot money source for Turkey's government under President Recep Tayyip Erdoğan 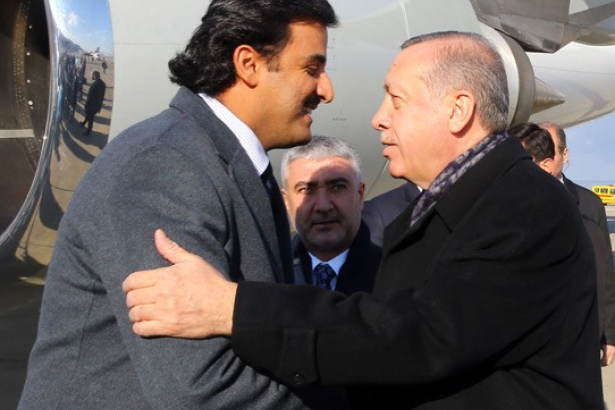 As some countries such as Saudi Arabia, Egypt, the United Arab Emirates, Bahrain, Yemen and the Maldives decided to cut ties with the gas-rich Gulf country Qatar on June 5, Turkish officials called for dialogue to resolve the escalating crisis in the wider region.

The Saudi-led group of countries accuse Qatar of harbouring and supporting radical Islamist organisations like the Islamic State (ISIS), al-Qaeda and the Muslim Brotherhood.

“We are deeply saddened by this decision,” the Turkish Foreign Minister Çavuşoğlu said as the diplomatic crisis severs, and the Ministry made a statement: "Turkey, as a responsible actor in its region and the current Chair of the Summit of the Organization of Islamic Cooperation, is ready to do its part with a view to finding a swift solution to this disagreement among friendly and brotherly countries."

While Qatar faces a multinational diplomatic isolation, it is very well known that Turkey’s ruling Justice and Development Party (AKP) has improved bilateral relations with the Gulf country in recent years in many fields like economy and military.

The Qatari ‘BeIN Sports’ also purchased ‘Digitürk’, a Turkish satellite television that had the broadcasting rights of Turkey’s top football league and some other major international sportive leagues and competitions.

The Qatari rate of exportation in Turkey was 421-million dollar in 2016. Ethem Sancak from the Justice and Development Party heads the Foreign Economic Relation Board/Turkey-Qatar Business Council.

Turkey’s biggest state-run tea producer company Çaykur, which was handed over to the Turkish Wealth Fund, is said to be pledged as security with 650-million dollar from Qatar.

While a Qatari group purchased the 50% shares of BMC Turkey, one of the largest commercial vehicle manufacturers in Turkey, some Turkish construction companies undertook 118 projects valuing 11,6-billion dollar until April 2015 in Qatar.

Being the seventh among the top nations investing in Turkey in 2016, Qatar also made an energy agreement with Turkey. BOTAŞ, Turkey’s state-owned crude oil and natural gas company, and Qatar’s national oil company signed an initial agreement to import LNG from Qatar.

154 Turkish companies participated in “Expo Turkey by Qatar”, and Turkish board manager of the expo, Hakan Kurt, said that the Turkish companies completed an undertaking valued at around 13 billion dollars while a contract of 7,5 billion is already continuing in Qatar.

As Turkey’s President Recep Tayyip Erdoğan and his Justice and Development Party (AKP) are known to be highly dependent upon the Qatari capital and investments amid financial and political challenges in last years in Turkey, whether the Turkish side will take further steps amidst the recent Gulf crisis is still a question mark.