"Pushing more right-wing politics is a must for bourgeois order"

SoL columnist Özgür Şen writes on the economic crisis conditions in Turkey and the bourgeoisie has no other options than pushing more right-wing politics to persuade people in no alternative. But we do not have to settle with it, he argues, "the necessity of the bourgeois order to turn right may pave the way for the left to be a hope for the working class and the poor" 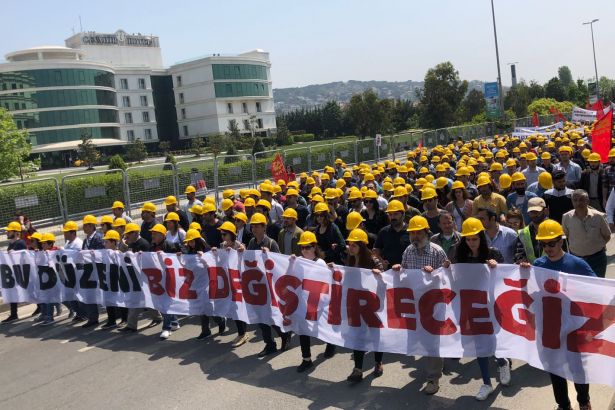 The number of unemployed in Turkey increased by about 1 million last year. Data on unemployment in the last three months, data from workplaces and labor organizations show that the figure will even increase more. We are faced with an extremely severe picture.

Currently, more than 7 million people are unemployed in the country. In other words, one in every five of our citizens who are capable of working cannot earn their lives and struggle with great difficulties.

How about those who somehow have a job right now or who somehow can study at the moment? Of course, they see the severity of the picture. The workers employed at the moment are persuaded to get less with the fear of losing their jobs, working longer hours in worse conditions. Studying young people know what they will face after graduating. A very large majority are worried and hopeless about their future.

Unemployment figures are explanatory indicators of the general situation in this country. People cannot find work; if they find they always have to work under difficult conditions, under threat with low wages; Turkey is a country where poverty and financial difficulty are widespread problems.

Moreover, the changing structure of Turkey's working class intensifies the problems with the migration from the Syrian and Asian countries. These people working in even much worse conditions with lower wages and without social security are suffering the most. And these people's suffering is used as a material for the racist politics of the irresponsible opposition parties like CHP and İyi Parti!

Moreover, there are many signs that this picture is not temporary and the problem will not be solved even if the Turkish economy starts to grow after the crisis. For this reason, it is useful to demonstrate the impact of the crisis on employment, but it is extremely dangerous to create a perception that the crisis will recover when the short-term effects of the crisis soften.

Turkey will live with high rates of unemployment. Likewise, wages in Turkey will continue to remain low. Working conditions will worsen, working hours will be extended, and the number of unregistered and precarious employees will not decrease.

The current crisis will be used as an opportunity to make this picture permanent. Because the capitalists in Turkey will continue to take the lion's share of the total production and to prosper.

On the one hand, there are rich people whose wealth do not decrease even in crisis conditions and whose living standards do not fall even if they are bankrupt. On the other hand, there are millions of people suffering from poverty with a deep concern for their future.

This is not an easily manageable conflict. To manage this deep conflict and to maintain this system, pushing more right-wing politics is a must.

It is not necessary for all of the poor millions to be adopted to reactionary and nationalist ideas, but thanks to those who are adopted, it is necessary for the millions to remain within such a right-wing clamp.

Proved with the similarity of to the pre-election rhetoric of the bourgeois parties, their state of being unprincipled and intertwined, a total right-wing wind seems to be a must for Turkey to be governed.

This is a graded ideological offensive. It is a multi-faceted attack in which those who are liberated from religious reactionism and nationalism are persuaded to this heavy right-wing atmosphere, to the pro-market policies, to have peace with capitalists and to have hopes from imperialist centers.

We are being tried to settle with this right-wing, with [ruling] AKP, [main opposition] CHP, [pro-Kurdish] HDP and all others. Because this is a must for them.

What should we settle with it?

There is only one way to resist such an extensive right-wing wave. Protecting the distance carefully and meticulously with every kind of political current that has been part of this wave or has been involved in this work, and keeping ourselves separate persistently. That's the way!

The necessity of the bourgeois order to turn right may pave the way for the left to be a hope for the working class and the poor. We should continue to defend the rights of the unemployed and the employed, the young and the elderly people, and the working people. Let's stand on the left and stand against this wave of right-wing.