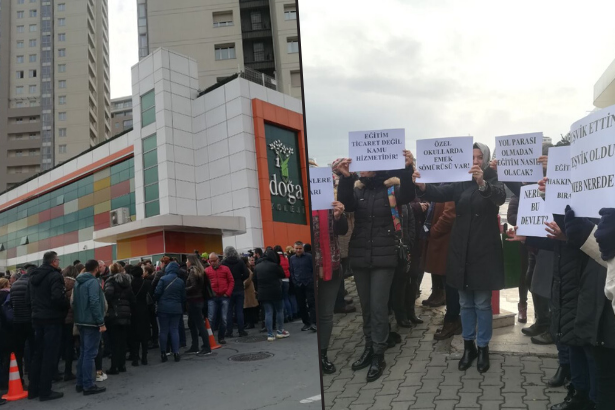 Hundreds of parents gathered in front of the headquarters of private school chain Doğa in İstanbul’s Ataşehir district to support the teachers who have not been paid for months and to protect the educational rights of their children.

The parents’ protests also took place in different schools in Ankara, İzmir and Antalya. They called on the Turkish Ministry of Education to get into action against the school management.

“The owner of the school turned a deaf ear to the teachers and the other employees who are struggling for live without receiving their salaries for months and to us, the parents, who send our children to this educational institution,” the parents said, pointing out to the financial troubles uncertain developments regarding the sale of the school.

The parents called on the ministry of education to take measures in order to put an end to the educational troubles because of the financial problems as the teachers have not been paid for months. They said that the school management is just wasting their and the teachers’ time.

The parents also underlined that hundreds of students preparing for university exams at Doğa Schools have been exposed to the negative psychological influence of this troubled situation and process. They asked whether the school management has taken measures in case of the sale and takeover of the school in order not to harm 65 thousands of students and more than ten thousands of employees.

“We want to be heard, and we demand that all the related institutions get into action immediately not to let thousands of young people, the hope of this country, and their families suffer,” the parents concluded.

The unpaid teachers of Doğa Schools organized and established committees under the solidarity network "We Breathe Down the Bosses' Neck" initiated by the Communist Party of Turkey (TKP) to get their rights and unpaid salaries. Private school teachers in Turkey widely suffer from exploitative and insecure working conditions.