Protests against purge of academics: #donottouchmyprofessor 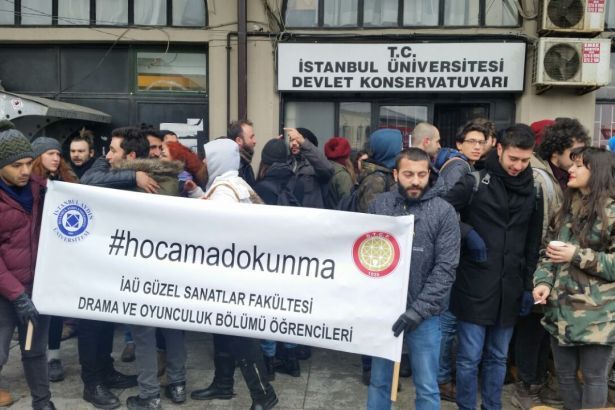 The recent Statutory Decree by AKP (Justice and Development Party) government in Turkey led to dismissal of hundreds of academics from their positions in universities. Some faculties of Ankara University lost an important portion of their academic staff. The dismissed academicians are known for their left-wing and opponent political stances.

This week started with protests in several universities. In Ankara University, faculty of political sciences and faculty of communication were the main targets of the attack by the government. On Monday, lectures in Ankara University were boycotted. Students and academics protested the statutory decree with the slogan "down with tyranny, long live freedom!"

In the Faculty of Communication, students occupied the dean's office and demanded the resignation of the dean.

In the Faculty of Medicine of Ankara University, academics and students protested the statutory decree, with a banner that reads "don't touch my professor". Academics demanded the return of dismissed staff to the university.

DEPARTMENTS OF THEATRE STAND UP

Protests in Kocaeli University were attacked by police forces. Protestors could not start their demonstration; 9 students and 3 academics are taken under custody by the police forces.

In Istanbul, the dismissals from university were protested in Marmara University, by academicians and students. The protestors were attacked by a group of fascist students with bottles of soda. No serious injury was reported.