After a strong earthquake of a magnitude of 7.0 struck Turkey’s western province of Izmir last week, soL news interviewed Zafer Mutluer, the board member of the Chamber of City Planners Izmir Branch on the importance of city planning in case of a natural disaster. 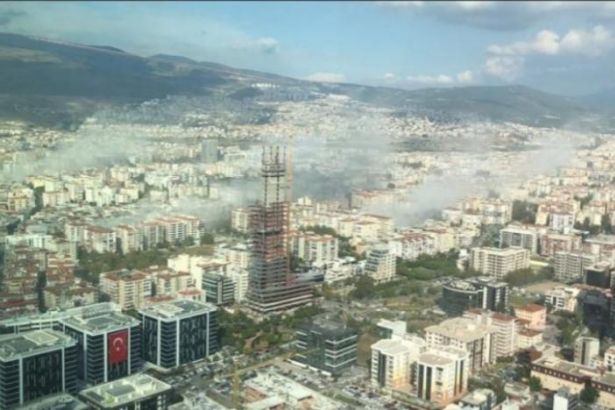 soL news interviewed Zafer Mutluer, the board member of the Chamber of City Planners Izmir Branch, on the most-damaged district Bayraklı's planning history and how it led to today's disaster that killed 114 people.

Mutluer emphasized urban renewal projects of Bayraklı in the 1980s and the role of the capitalist class in this transformation.

You emphasized the importance of research and analysis on city planning projects in your statement of the Chamber of City Planners Izmir Branch. Bayraklı is the most damaged district in the earthquake that hit Izmir last week. Bayraklı had an urbanization plan. Doesn’t the district plan include geological research and analysis? Were they insufficient? Can you review the relationship between the soil structure of the region and planning?

The region has been built up with plans approved by The Ministry of Public Works and Settlement in the early 1980s. We have some concerns about whether any geological research was run before the city plan was set. Even if some research was conducted, we think that observational techniques were used, not advanced technology. We are going to keep investing in this issue. However, it is already said that the soil structure of the region is not suitable for high-rise buildings for many times.

There was rapid population growth in Izmir, in the ’80s. In the meantime, the capitalist transformation provoked profit-oriented settlement in cities. The most affected regions in the earthquake were planned under these conditions. That is why there are up to 12-story buildings.

After the earthquake, we see that 3 or 4-story buildings are not damaged even though they are old and some are possibly unlicensed. So, the high number of high-rise buildings in this area is questionable. Moreover, in recent years, many skyscrapers have been built in Bayraklı, chosen as the new city center of Izmir. This earthquake revealed all these wrong decisions sadly.

They are trying to turn disaster into an opportunity for themselves and it is unacceptable. For many years, dominant politics imposed that the only way of transformation is to expand permissions for plans, increasing profit. They claimed that if the capitalists make a profit, it would be for the benefit of citizens. Now, we saw that ambition to make money kills hundreds of people.

The number of buildings in Izmir has increased in recent years. We know that there is housing oversupply in Izmir, but there is no quantitative analysis for that. So for whom these buildings rise? The needs of the capitalist class invalidate all the planning criteria.

We saw many damaged buildings that were sold as “safe” before. People need just safe houses.

What about emergency muster areas in Izmir? After the earthquake, tent areas are built but are they sufficient especially considering that damage is relatively low this time?

Luckily, the damaged region has relatively larger green fields when compared to other districts. Still some specified emergency muster areas are next to high-rise buildings and they can not be used. If dense-building areas had affected by the earthquake, we would have been in worse conditions.

The number of emergency muster areas in Bayraklı seems sufficient for the population. But infrastructures of these areas are not prepared. There is no electricity, clean water, bathroom, or laundry facilities in many areas.

City planning criteria should be considered not just in case of disasters but all the time, as a part of human life and communal living. They are all connected, the need for safe housing, sufficient greenfield, appropriate public transportation... What do you think about it?

Absolutely, I agree. The key to overcoming these kinds of disasters is appropriately planned communal life in planned cities. However, even in normal times, our cities are not planned in the right way. Planning discipline can only be embedded in central planning. Today, the profit-making motive of the capitalist class is dominating the plans for communal living, not social requirements. In this situation, appropriate planning for cities is not possible.

Determination of how much of the population will work and live in certain sectors or regions, transportation needs, socialization facility needs, etc. is only possible via a central planning system. The present inadequacy, unsteady state, and inequality are due to a lack of central planning.