The Egyptian police raid on Turkey’s state-run Anadolu Agency’s (AA) Cairo office has stirred new debates as Egypt announced that the pro-AKP think tank (SETA) was among the targets of the operation. What is the role of this foundation in Turkey’s foreign policy? 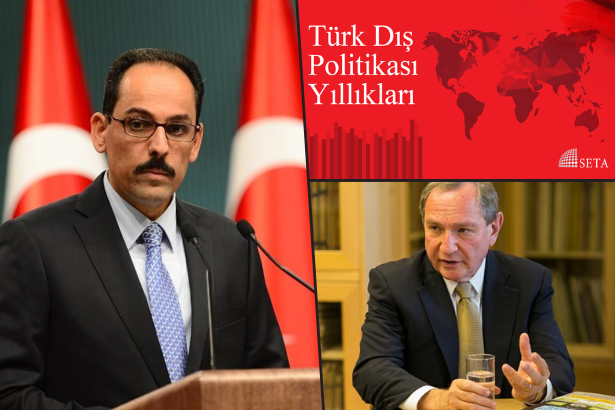 The Egyptian police raided the Turkish international news agency’s Cairo office on late January 14, detaining four people, including a Turkish citizen. The Egyptian security forces declared that Turkey’s pro-government think tank, the Foundation for Political, Economic and Social Research (SETA) and the Muslim Brotherhood were the targets of the operation.

As SETA was among Egypt’s targets, it has become a hot topic recently due to its determining role in Turkey’s foreign policy. Despite claiming to be independent, SETA is known for its close proximity to the ruling AKP as it has been functioning as a center for raising cadres for AKP.

SETA: THE DRIVING FORCE OF AKP

As there are many other key figures within the body of SETA with the aim of policy-making in favor of the AKP government, SETA often launches political debates to determine Turkey’s foreign policy via some channels like the state-run TRT TV and Sabah daily, one of the AKP-led newspapers of the country.

İbrahim Kalın, President Erdoğan’s current spokesman, was the founding director of SETA between 2005 and 2009. As former Prime Minister Ahmet Davutoğlu became the foreign minister after 2009, Kalın became a chief adviser of the premiership in the field of foreign policy. After getting various titles within the government, he finally became Erdoğan’s spokesman in December 2014.

As an Islamist and pro-US figure, Kalın wrote several articles and books with Islamic references in his academic life apart from his official works. He was also a columnist in pro-government Sabah daily in the past years. He contributed to many international Islamic encyclopedias.

Kalın studied for a master's degree at the International Islamic University in Malaysia. This university has been widely favored among Turkey’s Islamist politicians and scholars. The “school of Malaysia” is claimed to be very effective in shaping Turkey’s interior and foreign policies as this “school” was particularly led by the former PM and academic Ahmet Davutoğlu.

Kalın has had good relations with the US institutions throughout his academic and political life. He received his Ph.D. from George Washington University, and he was a faculty member at the Department of Religious Studies at the College of the Holy Cross in Massachusetts.

Kalın is also claimed to have a critical link to the American intelligence platform Stratfor, the Texas-based “shadow CIA” institution. According to Wikileaks’ Stratfor documents, Stratfor director George Friedman said, “This man is a big source, the relation must be kept secret; İbrahim’s ability of intervention shows our status.”

SETA is a very controversial think tank in Turkey considering that it previously prepared a blacklist of Turkish services of foreign media outlets. In early July 2019, SETA published a 202-page report titled “International Media Outlets’ Extensions in Turkey”, including the list of individual names and professional backgrounds of Turkish journalists.

SETA has been playing a major role in determining politics in Turkey and shaping an ideological frame from the perspective of the AKP government in harmony with the US, particularly in Turkey’s foreign policy.