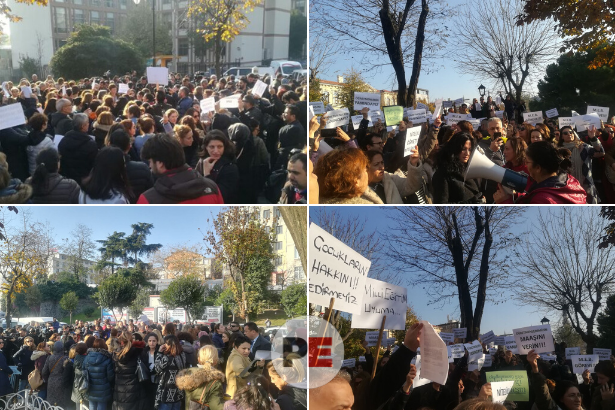 This week we had the first private school teacher boycott in the country's history. The boycott, which began on Monday by teachers forced to work at Doğa Schools without getting paid for the past three months, has been effective on campuses in Istanbul, Ankara, and Izmir. With 130 campuses, the school has its main centers in these three big cities as they have the highest number of teachers and students.

In five of the eight campuses in Ankara, in more than half in Istanbul, in one of the five campuses in Izmir, education stopped completely, while in the others it was largely disrupted. On the second day, the number of teachers participating in the boycott and the number of campuses where education was stopped was higher than on the first day. There was also no teaching on many campuses on Wednesday, despite the news that the school was sold.

In fact, there was some short-term non-attendance actions until Monday on some campuses by teachers who decided to take action after talking personally. We cannot that these short-term actions were effective. For the past two weeks, the parents have been taking action. During this time, parents gathered in front of the headquarters building in İstanbul's Ataşehir to express their reactions, made press statements in front of various campuses and demanded an explanation from the school administration on “the solution”. Despite the rumors emerged that the school had been sold and the minister said earlier in the evening “There is an update on the takeover, we will adhere it,” there was still no sign from the school administration.

Teachers at Doğa Schools have been silent on these conditions for too long. It must be obvious that the teachers care for the future of the students more than the bosses do. That is one reason they have been still working for months without getting paid. The other reason is that they are unorganized.

Workers organize to improve their working conditions. This is the way to achieve better conditions, such as having slightly higher wages, shorter working times, improved health and safety conditions, representation and bargaining rights.

The point is that there is a disorganisation in which conditions have declined to consent to work without pay, instead of improvement. In April of each year, going to class by wondering “Will I be in this school next semester?", but not sharing it with a colleague who spends the same sleepless nights... This situation, which is accepted as a private school fact, is exactly modern-day slavery.

“The collapse of privatized education, one of the ugliest faces of capitalism,” wrote Aydemir Güler, another soL columnist, in his column. It must be stressed that making the education system reactionary and the schools imam-hatips, on the one hand, and the marketization process in education and private schooling, on the other, became two sides of a coin. After a decade, what remains will be the private schools of the secular education market lining up for bankruptcy and the Islamic imam-hatip schools, which have a record of scoring zeros in national exams. It is very clear that it is unsustainable.

The case of Doğa Schools has now proved that disorganization is also unsustainable. What's worse than working without pay is the pressure you suffer when you don't work because you don't get paid. Especially on the third day of the boycott, almost all schools experienced this pressure. Private school bosses tested the bottom line of teachers ' disorganization at Doğa Schools.

We are not going to say that they have been successful this time. During these three days we left behind, the teachers of Doğa Schools managed to take action in the first private school teacher boycott of Turkish history.

The organizer of the boycott is the Teachers' Committee of Doğa Schools. The committee coming together from different campuses, thinking on their common problems together, organizing to fight against deprivation of the rights, spreading around the country with the workshops, is a part of the solidarity network "We Breathe Down the Bosses' Neck" initiated by the Communist Party of Turkey (TKP). They came together under the network, they are fighting shoulder to shoulder and they are resisting against the bosses and the failure of the privatized education system. After the teachers' boycott in Doğa Schools, the solidarity among teachers and the network is now much stronger.