Is politics suspended during times of war? 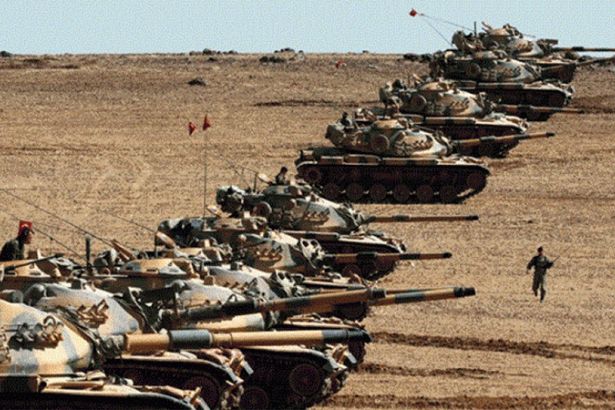 The two main forces of the opposition bloc, [the main opposition] CHP and [CHP-ally ultranationalist] IYIP, declared support for the Syrian campaign of the government, on the spot so to say. One of the individuals who suffered most the policies of AKP, Mehmet Ali Çelebi who was sent to jail when he was a young lieutenant in the Army by collaborating Gulenists-AKP at the time and who later has become an MP of CHP expresses the issue as “If it’s the Turkish army, the savior of the homeland who is intervening, then the politics is suspended”. We can ignore the details. What the opposition has been saying is more or less the same.

We need to mark this down. Some were really excited, thinking that former NATO officers discovered the imperialism after they were aggrieved by the wrath of the government and the US. Yet who apperceives imperialism apart from capitalism is doomed to make mistakes. This is such a big mistake that it makes you advertise the reactionist and collaborating policies of AKP rule under the label of anti-imperialism. What is more, they particularly make you advertise it. Thus you gain the favor of having the slogan “yes, but not enough” for the new term.* (*The columnist refers to the constitutional referendum in 2010 run by AKP which is considered to be a headstone in its rule where liberals adopted the mentioned slogan. He implies that for the government they have the same function with the ones whom they once opposed for years for cementing AKP rule which also purged them.)

It is marked now.

About the issue that the politics is adjourned in case of a war which has become the general perception of the opposition, could this be anyhow related to patriotism or caring about the interest of the country really? Is this approach a correct manner or compromise that needs to be made by everyone who cares about their country?

Whether this being considered a war or not is not the substance of the discussion here. The argument of “it’s not even a war” actually puts the attitude of the opposition in a worse calamity.

It, in fact, could be said, it is not even a war but only a bigger kind of the cross-border operations tens of which done thus far. Despite that, the opposition did not refrain from being part of this exaggeration as the AKP press enthused with janissary marches in order to exploit to the end this opportunity Erdoğan found in his jammed condition in the country. It has accepted to become one with the government and to confirm AKP’s decisions with the excuses like “unity against abroad in times of war”. Akşener (the president of IYIP) even did not forget to make a soldier salute in the parliament for the operation.

Let’s now travel to the past for looking into this war issue.

Even in the toughest days of the War of Independence, we observe that the discussions in the first parliament are really harsh.

When you examine these sessions, you will realize a very crucial non-concealable fact. What was discussed upon in fact is what needs to be discussed today: What is the system of a state and what is the main policy that governs it. The assembly was full of representatives who were in favor of the sultanate saying “let Mustafa Kemal stagger so that we could send him to execution” or “we have come this far, let’s broker a deal with Britain now”. Them, making the job of the leaders of the struggle is not because they are thickheaded but because they understand the course of events.

The understanding of “everything could be discussed inside, but we should unite against outside” never fits the facts of neither today nor the history. Because particularly the options in foreign policies cannot be separated from the contemplation of government of the country itself. Especially when arms are involved these options are a lot more visible. It was like this throughout history, and it is pretty much the same today.

One of the key discussions of the War of Independence, for example, was for how long the war could be sustained while the army was on the front. The ones alleging Mustafa Kemal of being adventurous suggested him making a deal with the British. This was an approach that could reach out to the very inner circle of the Pasha. There was scarcely any belief for an independent republic. Actually the number of individuals bearing this thought was only a few. Convening with the British and ending this work at a rational point… The expected outcome was the saving of an Ottoman of more territory loss and concession. Thankfully there was a leader on top of the government and the army who thought otherwise.

We can observe the same in Soviet Russia. Although the Tsar was overthrown and the so-called democracy was instated, the governing powers decided that Russia should go on with the imperialist war. Because they had nothing in the mind of an egalitarian republic. The usurpers of the country except for the Tsar and part of his bureaucrats were still in power and the wheels of profit were still turning. Therefore the war should be sustained. This war was only objected by the ones who have a contemplation for a new country, namely the Bolsheviks, which also carried them to power. All these mean that instead of “we discuss upon all things within the country, but for abroad we are united”, Bolsheviks opted to really save the country and to end the war.

Another example of this was the social democratic parties of the capitalist countries in WWI. All of them seconded their bourgeois governments whom they fought in earnest against within the country. When the war was over, the first hammer blew in their heads.

This only means that foreign policy, war, and contemplation of the country are not separable from one another.

Among what we foretold, Turkey’s limited Syria campaign seems in fact incomplete. Yet what we are trying to say is that the foreign policy of the country, particularly when arms involved, is directly the reflection of the contemplation about the country itself. Destroying the republic step by step, AKP is supporting for years those who divided Syria, jihadists in Egypt, ravagers of Libya only for this reason. All of them were parts of the same Muslim Brotherhood which was the proxy of US imperialism.

AKP’s buddies in Syrian campaign nowadays is the FSA. As the opposition keeps yelling out for the Turkish army, the pro-government press Yeni Şafak captions in four columns of the paper and lays on the cover the photograph of FSA soldiers. Turkey officially intervened in the soil of a sovereign state, against its will and together with a militia force (it was once called FSA and now turned into Syrian National Army) which lead an armed rebellion in order to divide it. Who is curious about what sort of social order is applied in the territories held by this so-called Syrian National Army should go visit and check out. We need to ask the ones claiming to have intervened for “the territorial integrity of Syria”: As a constitutionally secular state could Turkey’s national interest be creating sharia islets unknown to be whose proxy, instead of contacting openly and legitimately with the current government? Or is it anti-imperialism to attempt for an intervention with the consent of the US and the manipulation of Russia in the field?

It means that all these do not bother our opposition at all.

In fact, the support provided by the opposition to the government, as we have been emphasizing for a while, is an indication that the AKP republic has been embraced by all the actors of this system and the AKP system does not only consist of AKP itself.

Turkey has been governed both in and out of the country by the same mentality. Matters like war and operation are the “most substantial representation” branches of a country in the international arena. We are saying “Hands off of Syria” because we do not believe AKP represents or should represent the country and we dream of another one.