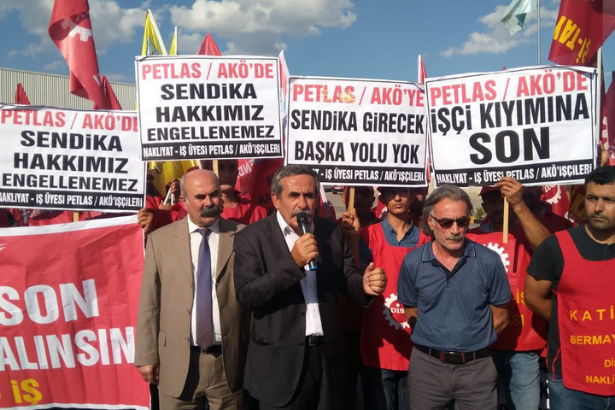 47 PETLAS logistics workers fired by company management due to their membership to Turkish Progressive Union of Sea and Land Transport Workers (Nakliyat-İş) affiliated to the Confederation of Progressive Trade Unions (DİSK) began to struggle for their rights in Turkey’s Central Anatolian province of Kırşehir on Wednesday.

Speaking in the protest organized by the workers in front of the company, Ali Rıza Küçükosmanoğlu, the head of Nakliyat-İş, said: "Whether you are a PETLAS employer or another boss, you cannot impose your own rules on the workers. If Turkey is a constitutional state, you are not allowed to violate the rules."

"PETLAS employer has been oppressing the workers just like the persecution of Israeli Zionism against the Palestinians for years. All our friends exposed to this oppression of PETLAS employer filed criminal complaints to the Chief Public Prosecutor’s Office", he stated.

Calling on the prosecutors having a clear conscience to do their duty, Küçükosmanoğlu noted: "We want legal authorities to initiate the necessary investigations about the employers carrying out anti-labor and anti-union practices by ignoring the workers’ rights and labor law."

Saying that the company authorities did the dirty on workers, Küçükosmanoğlu underlined: "It is claimed that the ministry has received information about the time and day of the union membership of our colleagues. If the information that must be confidential in the ministry is given to the employer, this is explicitly infamy."

The union workers stated that they would continue their struggle against anti-labor policies of PETLAS until the dismissed workers are reinstated with a collective bargaining agreement between the company and Nakliyat-İş, and until the PETLAS workers acquire their right to work under humane conditions and wages.

Despite its continuous oppression and anti-labor practices upon the workers confining them into poor working conditions and de-unionization, PETLAS ironically claims to respect "shared values" for "personnel satisfaction". "Our success is based on our people. We respect the personnel rights of every individual. We treat each other with respect and dignity. We provide opportunities for our people to develop their competencies and job skills," says the company website.